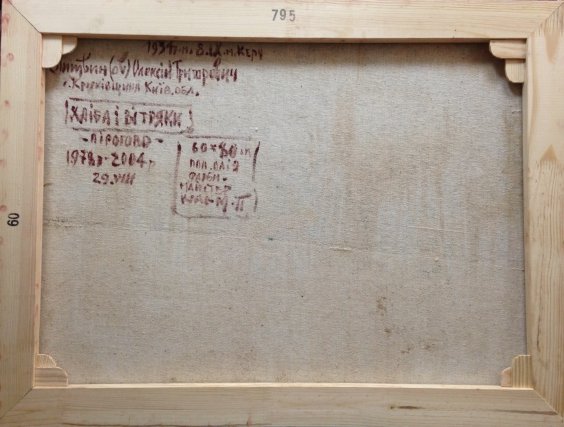 “Bread and mills., Pirogovo”
Lytvyn L. G.
$ Price on request
Order
In cart
Check out
The product is added to cart. Check out.
Specification 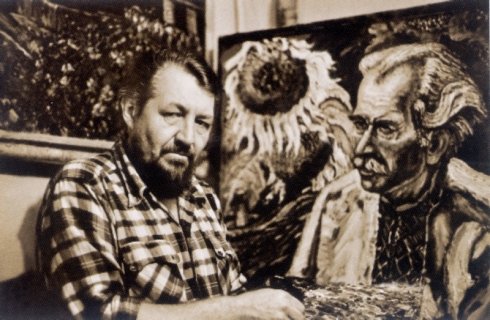 Soviet Ukrainian painter. Litvinov Alexei Grigorievich, signs his works: Leonid Litvin, was born in 1934 in the city of Kerch. From childhood I felt a craving for drawing, in 1955 I started to study at the Dnipropetrovsk Art College, which he graduated in 1961 (teachers M. Panin, M. Pogrebnyak, V. Shpiganovich). Then, more than fifteen years, as Grigory Skovoroda, wandered, studying as a life from Vladivostok to Leningrad, and museum collections. In 1978, Litvin permanently settled in the Kiev region. The artist is always with a brush and a palette. The village responds to the artist not by the perception of its differentness. Like the Union of Artists. The same was Maria Priimachenko, the fate of the eccentric befallen the genius Paul Cesan, Niko Pirosmani, all those who broke the established worldview of the environment in life and in art. His world is irrevocably based on three pillars: Ukraine is a constant object of his creative inspiration; a pictorial craft – as a way of realizing the personality and beloved wife Annushka, which Litvin not only writes constantly but also on the back of the canvasses all her life, addresses her with a declaration of love. Creativity of the painter is perceived as an encyclopedia of being of Ukraine, its land and people. With uncontrolled pressure superhuman, Michelangelo’s powerful temperament author of hundreds of paintings eagerly captures the diversity of landscapes in Ukraine, the sky, on which the stare, the people you meet in life, the flowers in the garden, still life. Shevchenko’s characters are the same as his neighbors, visually real people: the artist in dialogue with Naiminka, Kazashka Katya, a soldier in shackles and a bony with a scythe. Literary reflections and life observations are fused in color magma – in the panorama of the spiritual and physical being of Ukraine. Found at birth, belonging to Ukraine – not only an established plot, the image of the land, which multiplies endlessly in cycles of landscape paintings. Ukraine for Litvin – delusion, delirium and love. Artist brushes every touch asserts own spiritual affiliation to the land – hence the passionate need to write the bends of the rivers, fields, plane, plastic hills and cliffs, stormy skies with rain and lush baroque still lifes, and the main thing – to create the image of the beloved idyll Gannusi. Narcotic love for her and for Ukraine are synonymous. Between the two main characters there is no distance: Ukraine is equal to the beauty of Gannusi, and her body, chest, face, all her nature for Litvin is associated with the image of the fatherland. At a time when so-called contemporary art, or tired of praising himself postmodernism own boredom and glamorous passion obscure the real emotion when the judgment rationalism somehow enrolled in the Department of “love”, sensuous artistic madness Leonid Litvin equal Shakespeare or Dante’s passion appeal to Dame Petre: “Why do not you moan, like I’m in my hell?” With total devotion to art, the exhibition biography of the painter is brief. He is a man incapable of self-promotion and practical deeds. From time to time, since 1965, his canvases appear on republican and regional exhibitions. Only in 1989 there was a large exhibition of the artist Boyarka in the Lenin Museum in Kiev … Finally, in 2000, lovers of painting got acquainted with the large exhibition of Litvin in the National Museum. T.G. Shevchenko (Kiev). Ivan Dzyuba – then chairman of the committee for the National Prize. Shevchenko, was imbued with the fate of the artist. And to this day the Dzyuba family has not left the artist. Cloths attracted attention not only with the author’s obvious love for Ukraine, but also with an alarming, dramatically tense interpretation of seemingly idyllic themes. The active black outline, typical for the style of Litvin, dark, silvery gamma too clearly hinted at the difficult fate of his native land. In this happy-dramatic, ambivalent swing, in constant tension, in the dynamics of a splash and fall into darkness, the master’s soul lives and a rather stiff stylistics of canvases. Stylistically, Litvin balances on the scrap between individual techniques of professional (scientific) art and naivism and even kitsch. His style as a chameleon, every minute seems to change the perception vector of the canvases. We see the immaculately constructed design of a nude model, and next to the echo of folk naivism such as “rugs with swans.” Opposite pictorial systems are connected by an integral knot in the author’s picturesque thinking, which gives grounds to insist on the marginal basis of Litvin’s work. The author of the rampant element, in fact, is an expressive existentialist. Litvin’s life intensified on the brink, on the bridge between the two banks. He is the carrier of the intermediate type of sociality; The person who is in the center of the conflict with the generally accepted norms, he self-isolated from them. The artist is a “frontier” person, outside systems, neither here nor there. This artist is ambivalent. And only a powerful creative force, God given the creative and human temperament does not allow him to fall, and naob

orot, with an incredible vision of his own mission to write Ukraine. His painting does not fit into the usual canons. Specialists call Litvin’s manner of expressive existentialism. Compare with Cezanne, Gauguin and Pirosmani … Until now, the unique work of Leonid Litvin (Alexei Litvinov) was practically unknown to the general public or to colleagues in the shop. The artist, who is alien to self-advertisement and pragmatism, was isolated from society, literally living the art. Living in poverty, without basic amenities, the master stubbornly did not want to part with his work, entirely devoted to art. In recent years, when his and his wife’s health deteriorated, he twisted the pictures into bundles and put them in the attic. So in the XIX century left in the attic of the canvas of unknown painters, rogue, already after death gained world fame. “The fate of the artist could be the same as that of Van Gogh,” noted Olga Petrova, a well-known art critic, noted at the presentation of Leonid Lytvyn’s exhibition at the Presidential Foundation. – But, fortunately, on his way met Ivan and Marta Dzyuba. Their family has been guarding this talented person for more than a decade. As the founder of the Ukraine Foundation Leonid Kuchma noted at the meeting, “getting acquainted with the paintings of this artist will bring aesthetic joy to both present and future generations.” Seven works of Leonid Litvin received a permanent residence permit in the National Museum of Taras Shevchenko – they were bought from the artist by the Azerbaijani oil company SOCAR Energy Ukraine. Thanks to the efforts of Ivan Dzuba and his wife Martha Vladimirovna, with the support of the Presidential Foundation Leonid Kuchma “Ukraine” and Igor Lagoid, at the end of 2012 – beginning of 2013, two exhibitions of works by L. Litvin took place; publishing house “Lybid” was published the catalog “Leonid Litvin. Painting »with a foreword by Martha Dzyuba and articles by Alexander Fedoruk, Olga Petrova, Boris Egiazaryan. Of particular interest are several excerpts from the artist’s correspondence with Ivan Dzyuba. “We are already living in the 17th century (literally) (oven, candle, poverty and the inquisition, etc.) but for the soulful communication with Rembrandt Van Reyn and Taras Christ Shevchenko is the right thing … Despite Anna’s” voices and her noises “, I become more and more calm and take this comedy of life with a smile.” “… As long as they are enslaved by spiritual slavery, people will not be free. The whole history of art shows one thing: bondage and oppression of talent by workers. The soul and the discoveries of the feelings of love and unity can not be controlled by rogues and rogues who rule in the state with art. This is an axiom! “- From the letters of Leonid Litvin. Photo: In the premises of the Presidential Foundation Leonid Kuchma “Ukraine” an exposition of 39 paintings by the artist Leonid Litvin (Alexei Litvinov) Photo: Leonid Danilovich was pleasantly surprised by the influx of media representatives: “So this event is really worthwhile. I think that very soon the name of Litvin will shine brightly throughout Ukraine, since, of course, he deserves it. And, of course, it is necessary that the local authorities pay attention to such a nugget, since the artist himself is a proud person and will never turn for handouts. “

Photo: “My hut-workshop” 1980 year. The National Museum of Shevchenko was given pictures of the “Ukrainian Van Gogh”; works of the artist will become the national treasure of Ukraine and replenish the museum collection of masterpieces of Ukrainian painting 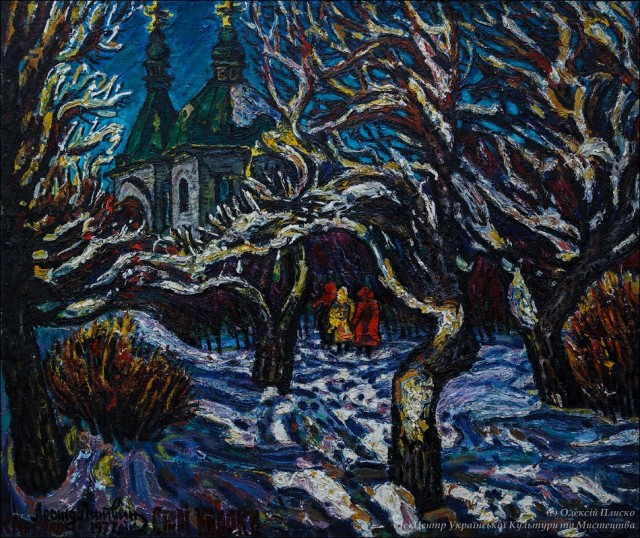 Photo: At the exhibition from left to right: “Self-portrait with candles”. 1987; “My hut-workshop.” 1980 year. Leonid Litvin

Photo: Director of the film about Leonid Litvin Alisa Kovalenko (on the wall from left to right: Happy Foolish Man, 1979, “Self-Portrait with an Apple”, 1984) Photo: People’s Artist of Ukraine Vera Barinova-Kuleba at the opening of the exhibition “Ukrainian Van Gogh” Leonid Lytvyn in the premises of the Presidential Foundation Leonid Kuchma “Ukraine” 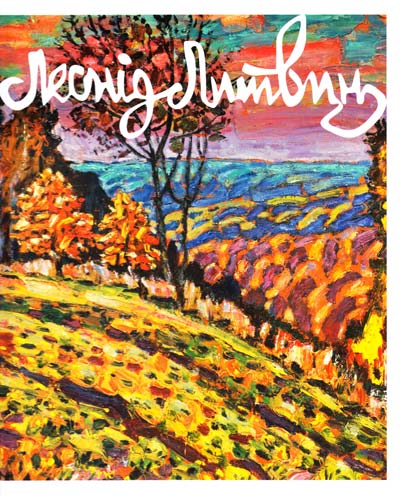 Photo: Marta Dzyuba; articles by Alexander Fedoruk, Olga Petrova, Boris Egiazaryan. “Leonid Litvin. Painting.” This album is the first edition dedicated to the work of Alexei Grigorievich Litvinov (Leonid Litvin). For more than half a century of service to art, the artist created his own original picturesque world 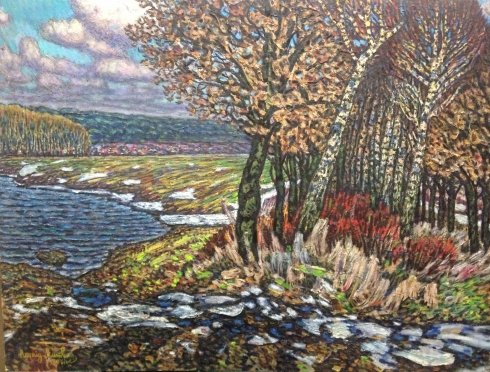 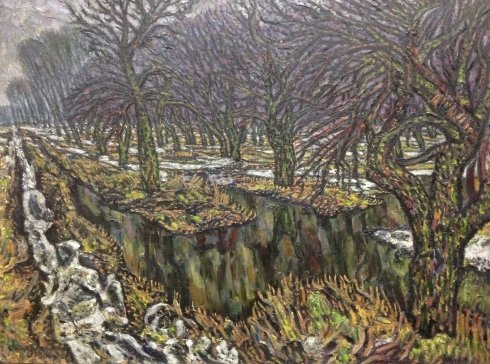 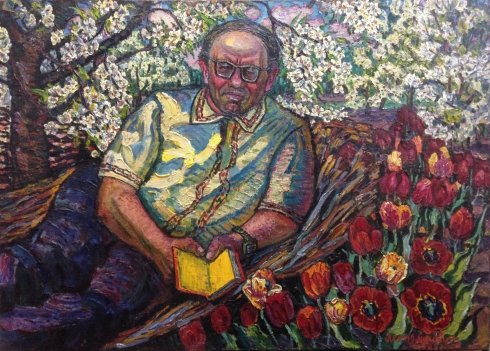 Order
In cart
Check out
Просмотр
$Price on request
Portrait of “My Anna”
Lytvyn L. G. 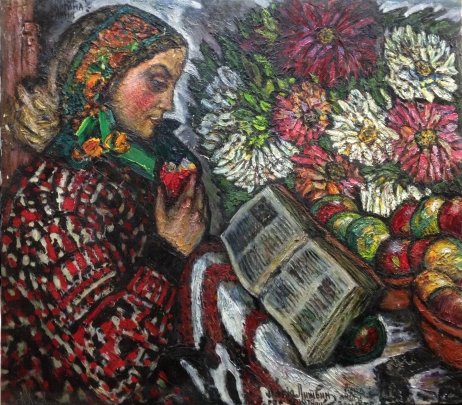