“Steppe Crimea”
Stolyarenko P. K.
$ 350
Order
In cart
Check out
The product is added to cart. Check out.
Specification

the piece is for sale

Soviet painter. People’s Artist of the USSR. Member of the USSR Academy of Arts. Petr Kuzmich was born on July 13, 1925 in the village of Kapkany near Kerch in the family of fish farm manager, ichthyologist Kuzma Semyonovich Stolyarenko. Like his father, who was fond of painting in his youth, Peter smalou showed a penchant for drawing. One of the vivid impressions of his childhood was a visit together with the father of the Feodosia Picture Gallery. IK Aivazovsky. Later, while living with his aunt in Feodosia (1936-1942), he “went to the gallery as a temple and tried to write, imitating Aivazovsky.” He was fortunate enough to also visit KF Bogaevsky’s studio – thanks to the same aunt who was lining up the wife of the famous artist. However, Stolyarenko began to study painting systematically only after the war, and until then, at any opportunity, was engaged independently. The war found a young man in the North Caucasus, during the occupation of which he became a connected partisan detachment. Returning in 1945 to Feodosia, Peter entered the art studio of NS Barsamov. Here, his fellow practitioners became known subsequently painters S. Mamčić, A. Sokolov, N. Shorin. As a payment for training Stolyarenko, like many other studios, performed various economic assignments at the picture gallery. Nikolay Barsamov highly valued the ability of his pupil. He recalled that he spent all his spare time painting, and his skills grew literally in front of him, he noted that Stolyarenko possessed an innate compositional flair and a correct vision of the perspective. At the end of his studies in 1947, the young man entered the Simferopol College. NS Samokisha, and immediately was enrolled for the fifth year. He took up work on the diploma, but in connection with the staff reshuffle in the school he was transferred to a lower course. Then, on the advice of Barsamov, who believed that further education would only harm the manifestation of his creative individuality, Stolyarenko abandoned his studies and returned to Feodosia. Here at the studio exhibition for the 30th anniversary of the Red Army, he demonstrates the painting “Attack of torpedo boats” (1948), which brought him the first success – Stolyarenko was accepted as a candidate for membership in the Union of Artists of the USSR. So the independent creative way of the master has begun. Since 1952 he has been actively involved in the all-Union, since 1953 – in international exhibitions, becoming a member of the Union of Artists of the Ukrainian SSR. 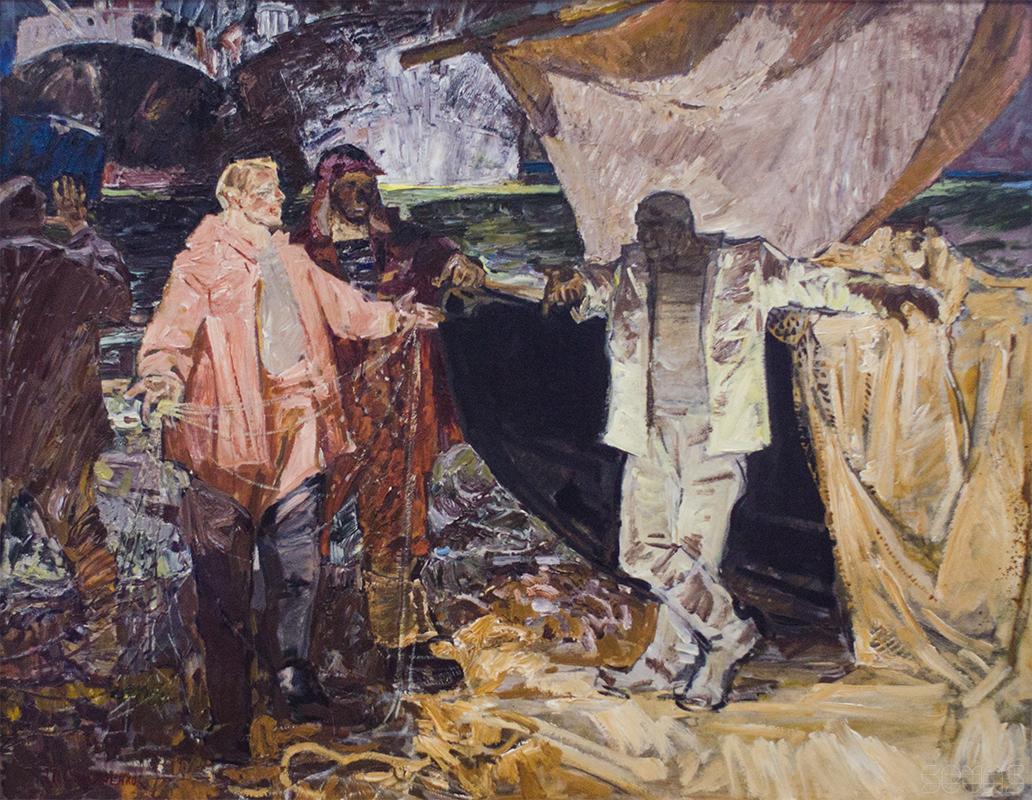 In 1951, Stolyarenko moved to Kerch. To maintain a family, he has to combine art with fishing. This period of his life is reminiscent of paintings and sketches depicting fishing villages, bots, port shipyards and ships. Written mainly in the silvery-blue range, they, however, represent only one of the directions of the artist’s work. At the same time, he creates unusually bright canvases filled with sunlight (Spring Motive, 1952, Lane in Gurzuf, 1958) or bold fragmentary compositions , built on the contrast of blue-blue, red and yellow flowers (“Draw Networks”, 1955). In the style of Soviet art of the late 1950s and 1960s, with characteristic searches for a laconic monumental and decorative form, his paintings “At the Dock” (1959) and “At the Shipyard” (1957), where the reception of a dramatically rising prospect was used. The “Kerch fishermen” (1956) appear before us tired and rough, although here one can speak more about the “severity” of life, rather than style. Compared with this picture, a truly bright monumental and decorative panel perceives the “Shaland, full of mullet” (1975) with characters that radiate energy and optimism. During the 1960-1980’s. Pyotr Stolyarenko manifests himself as a versatile artist-experimenter. In 1969, he moved to Yalta, and since then, not only the views of Bakhchisaray, Theodosia and the Old Crimea, but also small towns and cities of Big Yalta are the subjects of his works. And, of course, exciting, every time a new sea seen. Written in the open air, where he often traveled with P. Miroshnichenko and F. Zakharov, his landscapes are extremely emotional, always fresh in attitude and invariably attract attention with amazing color combinations and the beauty of painting. Better known to the general public as a landscape painter and marine painter, P. Stolyarenko also addressed a thematic picture, creating canvases for the military (“Soldiers went”, 1987) and historical and revolutionary subjects (“Revolutionary Revolution”, “For the Power of Soviets”). In addition, he was an excellent master of still life. Its compositions with luxurious bouquets of lilacs on porcelain served tables are very popular. Often these tables are carried by the author to the garden or to the verandas overlooking the sea (“Summer”, 1974, “Wisteria”, 1997). Not lacking salon gloss, paintings of this kind had considerable success in Paris, where the artist worked in 1990-1995. So, in 1994, at the French auction “Russian artists” one of his paintings was sold for 47 thousand francs, and a composition on a similar theme – “At the dacha in Foros” (1980s) set a record in the domestic market – $ 80 000 USD. Follower of the romantic line of KF Bogaevsky and master of the epic landscape is Stolyarenko in the pictures “Winter in the Mountains” (1963), “The Summit of Demerdzhi” (1970), “Koshary” (1973). The continuer of the traditions of the classical marina and “good” realism of the mid-twentieth century. – in the meter cloths of the 1980s: “Sails”, “Steamboat” and “Teplokhod” Georgia “(sold at auction” Corners “for $ 28,000). Still studying in the studio, the artist has established himself as a brilliant interpreter of the pictorial manner of IK Aivazovsky. This is evidenced by the copy of the painting “Among the Waves”, exhibited by Stolyarenko in 1982, which was exhibited at the auctions of Korners. His landscape paintings often include genre scenes or figurines of bathers – “Old fig, woman and eternal” (1970), and sometimes also portrait images – “Tonya Pavlenko” (1955). In actual portraits or nudes – “Naked” (1963), a person is perceived as an element of composition, subordinated to a pictorial whole. Varied creativity Stolyarenko does not succumb to the accepted in the art history literature division into periods. Themes, motives and ways of their implementation, he chooses each time different – depending on the spirit of mind and the tasks assigned to him. This is well traced in the manner in which he writes the sea – then chaotically restless, repeatedly crossed by long strokes, then superimposed palette knife in parallel and pasty, then thickly mixed, quickly changing the texture and color like the sea itself – “Stormite” (1959) or vice versa – the most delicate tonal transitions, almost illusory transferring the surface of transparent waves. The artist can apply impressionistic techniques (“The Sea under the Sun”, 1969) or the corpusque picturesque manner of Cezanne (“The Corner of the Old Manor”, 1961), write like a pointillist (“Peach Blooms”, 1973, “Veranda in the House of A. Chekhov in Gurzuf” , 1972), or, following the Fauvists, fixing fragments of reality in the “beating eyes” contrasts of violet, yellow, lilac and white (“Old Gurzuf”, 1968). A wonderful colorist, Stolyarenko subtly conveys the variability of nature, associated with the seasons or the time of day. Fascinated by the color nuance, in his nocturnes (Twilight, 1961, Spring Twilight, 1961), he is surprisingly close to the aesthetics of the “miriskusniki” with their love for “artistic mysticism.”

Petra Stolyarenko is called a modern classic, a Soviet post-impressionist. His works are kept in the largest museums in Ukraine. In the auction catalogs, they often appear among the top lots and even in times of crisis remain in demand by collectors. Stolyarenko is a master of bright and picturesque talent, whose work has reflected the beauty and richness of the Crimean nature. Recognition of his original talent is evidenced by the awarding of high titles of the Honored (1972) and People’s (1985) artist of Ukraine, the gold medal “For Contribution to World Culture” (2010) of the Russian International Fund “Cultural Heritage”. Year after year Stolyarenko tirelessly improved his skills. “When he worked, he looked as if he knew what and how he would do now and what results he would achieve,” recalled N. Barsamov. It is not surprising that in the declining years the master enjoys well-deserved fame, and museums and collectors are eager to acquire his works.