“Landscape” Malyshev G. I.
$ 450
Всего: $5960
Your cart
No products in cart
Total:$0
Cart page
Check out
HomepageFine art“Before the rain” “Before the rain”
Balla P. K.
$ 750
Order
In cart
Check out
The product is added to cart. Check out.
Specification

Soviet Ukrainian painter. Member of the USSR Academy of Arts. He was born on April 18, 1930 in the village of Pavlivtsi, Kapushansky district (Czechoslovak Socialist Republic). He graduated from the Uzhhorod College of Applied Arts (1950) and the Lviv Institute of Applied and Decorative Arts (1956). Teachers by specialty – I. Bokshay, A. Erdeli, R. Selsky, J. Shcherbatenko, I. Gutorov. He worked in the field of monumental and decorative art, easel painting and graphics. Member of the National Union of Artists (1968). Member of the CPSU. He was awarded a medal. Major works: graphic series “T. G. Shevchenko and Transcarpathia “(1961); decorative decoration of the restaurant-cafe “Verkhovyna” in Uzhgorod (1965); restaurant “Carpathians” in Chopi (1966); decorative painting of the “Reunification” hall of the Transcarpathian Museum of Local Lore in Uzhgorod (1967) and others. Participated in exhibitions: regional since 1947; republican since 1961; beyond the boundary. Major works: Portrait of Petôf Sándor (1973), Meeting in the Highlanders (1974), Reading the Manifesto (1975), Blooming Magnolias (1976), “Standing and Listening to Spring …” (1980) , “Oprishok” (1987). The works of the painter are represented in many public and private collections in Ukraine and abroad. 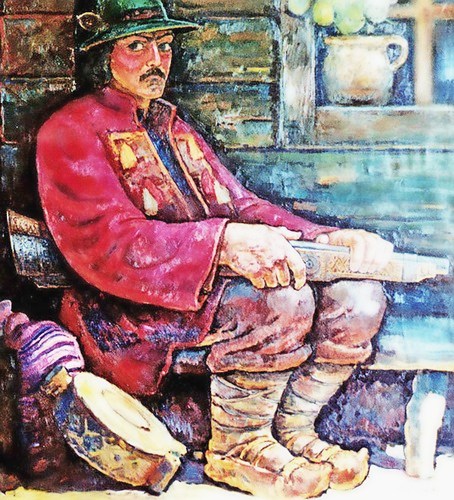