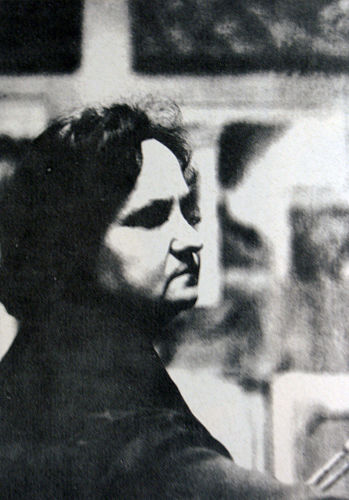 Soviet Ukrainian artist, painter. Member of the USSR Academy of Arts. Zinaida Ilyinichna Zatsepina was born on October 29, 1913 in the settlement of New Kalitva, Voronezh region in Russia. From 1933 to 1936 she studied at the Tambov Artistic and Pedagogical Technical School, and from 1937 to 1939 – at the Penza Art College from IS. Goryushkina-Sorokopudova. In 1939, Zinaida Zatsepina became a student of the Kiev State Art Institute. Her teachers were F.G. Krichevsky, K.D. Trokhimenko, AA Shovkunenko, A.I. Fomin. During the Great Patriotic War she continued her evacuation training in the Ukrainian branch of the United Art Institute of the All-Russian Academy of Arts – first in Samarkand, then in Zagorsk near Moscow. The training was conducted by such outstanding artists as I.E. Grabar, S.V. Gerasimov, P.D. Pokarzhevsky, I.N. Shtilman, K.N. Yeleva. In 1944, the artist returned from the evacuation and was enlisted in the workshop of Professor AA. Shovkunenko Kiev Art Institute. In 1948, Zinaida Zatsepina graduated from the institute. Thesis “Kindergarten”. The artist’s wife, P.S. Sulimenko. Member of the Union of Artists of the USSR. Worked in the field of easel painting. Author of portraits, landscapes, still lifes and genre paintings. Since 1949 ZI Zatsepina exhibitor of city and republican art exhibitions. In 1954, he took part in the All-Union exhibition of works by marine painters, opened in Moscow from February to March at the Artist’s House; and from April to May in the Central House of the Soviet Army. Since that time he has been an active participant in the All-Union and foreign art exhibitions. Personal exhibitions were held in India (1959), Kiev (1977) and Penza (1979). Works Zatsepina Z.I. are represented in the National Art Museum of Ukraine, in art museums in Odessa, Poltava, Nikolaev, Simferopol, in private collections in Ukraine and abroad. Photo: Zinaida Zatsepina “At the dacha”