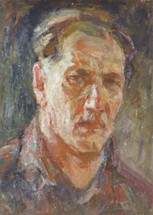 Soviet artist. Member of the USSR Union of Artists. Y.D. Liberov. was born in February 1921 in the village of Khmeleviny Vetluzhsky district of the Nizhny Novgorod province. His father came from the family of a priest. During the First World War, he was awarded the St. George Cross. He died in September 1921. Mother came from a noble family. Education of Yuri took over his uncle BG. Pushkarev. He was a talented teacher, encyclopedist, artistically gifted man, who played a huge role in the formation of Yuri Dmitrievich as a person and artist. After graduation, Yuri Liberov enrolled in the Gorky Art College, but was soon drafted into the army, and then the war began – first the Finnish, then the Great Patriotic War. After the war, on which he was wounded, Yuri Liberov graduated from art school with honors and received a diploma in drawing and drawing. Lived and worked in Gorki. From 1955 to 1976, Yuri Dmitrievich lived with his family in the city of Zavolzhye, worked as a drawing and drawing teacher at school # 3 and at the same time led an art studio at the House of Culture. At the All-Union Pedagogical Readings he delivered a report later presented at the Exhibition of Economic Achievements. For fruitful work in 1962, he was awarded the title “Excellent worker of public education”. His wife Zinaida Aleksandrovna – Honored Teacher of Russia – worked as a teacher of Russian language and literature. She was for Yuri Dmitrievich a real muse a thin, intelligent, bright man. In parallel with the pedagogical activity, the artist had a great creative work. His house in the Finnish village became an attractive place for Gorky artists, who lovingly called him “liberal”. Since 1976, the artist lives in Nizhny Novgorod, where he held about 30 of his personal exhibitions. Yury Dmitrievich is an exhibitor of exhibitions in Moscow, Leningrad and other cities of Russia, participant of exhibitions selling Soviet art in Czechoslovakia, USA, Spain, Germany, Finland, Japan. Since 1951 – a permanent participant in regional exhibitions. Exhibitor zonal (“Big Volga”, 1967,1985, 1991, 2003), Republican (Tula, 1977) art exhibitions. Personal exhibitions in the cities of Gorky, Nizhny Novgorod: 1971, 1981, 1982, 1987, 1996, 2001, 2002. Major works: “The White River. Fishermen “(1962),” Lenin Square “(1975),” Gorkovskaya HPP on November 2, 1955 on the day of the launch of the first unit “(1975),” Clouds over the Volga “,” Kalitka “(1994),” Spring on the Great Pokrovka ” (1994), “Umbrellas with the Bank” (1994), “Kalitka” (1994). He specialized in landscapes, portraits. Yury Dmitrievich Liberov is a fine Russian lyrical poetry artist. He entered the history of Nizhny Novgorod art with his captivating “Liberian impressionism.” 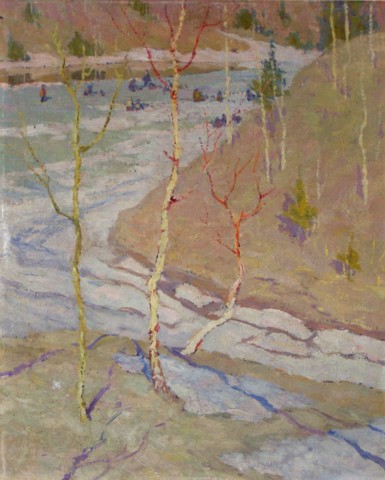