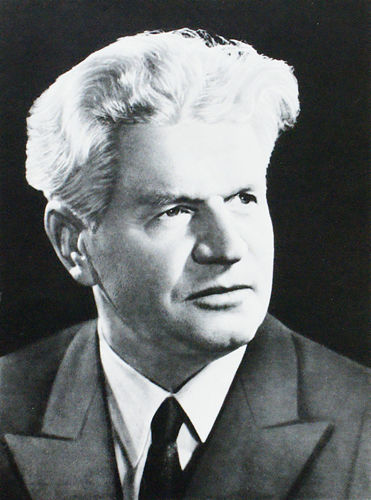 Soviet Ukrainian artist, the author of art works. Member of the USSR Union of Artists. Honored Art Worker of the Ukrainian SSR. Yatsenko Vladimir Fedoseevich was born on April 21, 1915 in the village of Savkyvka, Cherkasy region. He received his primary art education from 1931 to 1937 in the Kharkov Art College, where his teachers were A. Kokel, J.Z. Vladimirov, M.Ya. Kozik. In 1937 he entered the Kharkov Art Institute, where he studied at the workshop of Nikolai Semenovich Samokish, who was a favorite pupil. His teacher Yatsenko in 1954 dedicated a monograph “NS Samokish”, and in 1979 – the album “Nikolai Samokish.” The artist also visited the workshops of F. Krichevsky, S. Prokhorov, M. Sharonov. Completed training in 1942 in the evacuation, in Samarkand. There he met V. Kasiyan, I. Shtilman, I. Grabar, S. Gerasimov, D. Moor, V. Favorsky, P. Pokarzhevsky. Member of the Union of Artists of the USSR since 1943. Participant of numerous exhibitions. Returning to Kharkov, from 1944 to 1952 he held the post of director of the Kharkov Art Museum, conducted his reconstruction. From 1945 to 1946 Yatsenko Vladimir Fedoseevich taught at the Kharkov Art Institute. In the early 1950’s, the artist moved to Kiev. In 1961 he was awarded the title of Honored Artist. From 1970 to 1989 Yatsenko V.F. headed the State Museum of Ukrainian Fine Arts. He was awarded two Orders of the Red Banner of Labor, medals, the Diploma of the Presidium of the Supreme Soviet of the Ukrainian SSR (1964, 1975), the Certificate of Honor of the Council of Ministers of Ukraine (1999). Died October 23, 2010 in Kiev. Work Yatsenko V.F. are stored in museums, galleries and private collections in Ukraine and abroad.

Photo: Yatsenko V.F. “In the places of the legendary battles” 1984

“Honored Artist of the USSR Vladimir Fedorovich Yatsenko”. Catalog of the exhibition of works.
Kiev organization of the Union of Artists of the Ukrainian SSR. Kyiv, “Advertising”, 1986.