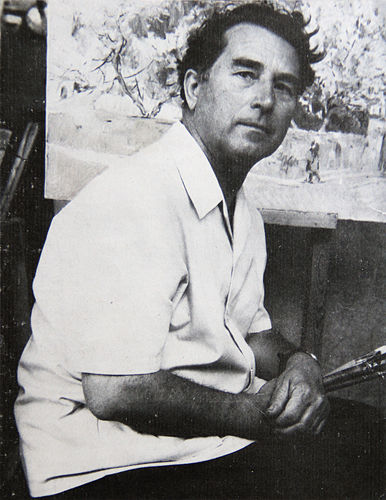 Soviet Ukrainian painter. Member of the USSR Academy of Arts. Stepan Kalinovich Yarovoy was born on October 19, 1913 in the village of Barvinkovo, Kharkov region. Since 1936, the artist lived in the Crimea. In 1939 he studied at the art studio of the Yalta House of Folk Art. Member of the Great Patriotic War, marked combat awards. After the end of the Great Patriotic War, Stepan Yarovoi studied at the Moscow Central Art Studio “Vsekohudozhnika” (All-Russian Union of Cooperative Associations of Fine Arts Workers, who existed from 1928 to 1953). His teacher was B. Ioganson. Worked in the field of easel painting. Landscapist, marine painter. Since 1958, Yarovoy S.K. – Member of the Crimean Organization of the Union of Artists of the USSR. He exhibited his works at regional exhibitions since 1940, on republican exhibitions since 1954, on all-Union exhibitions since 1955. Participated in foreign exhibitions: 1974 (Hungary, Kecskemet), 1975 (Japan, Tokyo), 1976 (France, Nice). Personal exhibitions were held in 1956 in Yalta, in 1960 and 1964 in Simferopol, Sevastopol and Yalta. Posthumous exhibitions of the artist were held in the National Museum of T.G. Shevchenko: in 2008, timed to the 95th anniversary of the birth of the painter and in 2013, timed to the 100th anniversary of his birth. The artist died on July 3, 1988 in Yalta. The works of Stepan Kalinovich Yarovoi are kept in museums in Kiev, Yalta, Feodosia, Simferopol, Sevastopol, Donetsk, as well as in private collections in Ukraine, Russia, Poland, France, Germany, Japan, Finland, Canada.