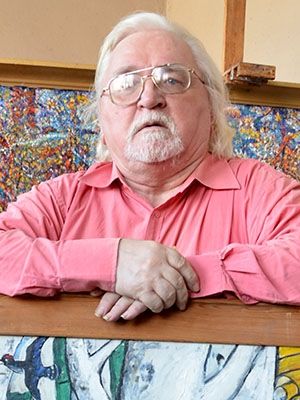 Soviet Russian painter. Member of the USSR Union of Artists. Born April 10, 1937 in the Irkutsk region. In 1953, without preparation, he entered the Irkutsk Art College at the end of which, on the advice of his father, entered the Leningrad Institute of Painting, Sculpture and Architecture. I. Repin (HIHA). His teachers were: IP Veselkin. B. S. Ugarov, A. A. Debler, V. M. Oreshnikov. From the very beginning of his studies, Sergei Yakobchuk has established himself as a very industrious, talented, active artist whose creative search and aspirations are inseparably linked with the traditions of the Leningrad painting school of the middle and second half of the 20th century. In 1965, S. A. Yakobchuk graduated from the State Institute of Higher Education. I. Repin Academy of Arts of the USSR defending the diploma on the “excellent” painting “Concert in the field camp” (Research Museum of the Russian Academy of Arts). Between 1966 and 1968, the artist continues to improve his skills, working in a creative workshop under the guidance of the Rector of the State Museum of Fine Arts, Professor of Painting, Corresponding Member of the Academy of Arts of the USSR, People’s Artist of the USSR – V. M. Oreshnikov. In these years, the works of the young artist are exhibited at all-Union, republican, zonal exhibitions, exhibitions of works by Leningrad artists. In the spring of 1968, Sergei Yakobchuk graduated from the creative workshop of VM Oreshnikov, writing a picture of “Raznaryadka”, presented at the exhibition “50 years of the Komsomol” in Moscow. Since 1968, Sergei Yakobchuk often goes to the North – he makes sketches, meets fishermen, carefully studies the harsh life and hard work of the inhabitants of the Kola Peninsula. In 1970, SA Yakobchuk joined the Leningrad branch of the Union of Artists of the RSFSR in the painting section. At this time, marked by stability and the absence of political upheavals, the artist with special love and penetration turns to the image of Leningrad. The painting “Summer Leningrad (at the Admiralty Embankment)” (1972-1974) was never exhibited during the artist’s lifetime. A special place in the creative biography of SA Yakobchuk is occupied by works created as a result of creative trips to the construction of the Baikal-Amur Mainline. In the mid-1970s and early 1980s, the artist with great penetration and imaginative beauty praised the construction of the Baikal-Amur Mainline and the heroic everyday life of Soviet youth. In 1979, the Central Exhibition Hall of the Main Directorate of Culture of the Executive Committee of the Leningrad City Council hosted the Republican Exhibition of Works of Artists of the RSFSR “We are Building the BAM”. The decree of the Secretariat of the Central Committee of the Komsomol, the collegium of the Ministry of Culture of the RSFSR and the Secretariat of the Board of the Union of Artists of the RSFSR of July 9, 1979 “On the results of the competition for the best work of art dedicated to the builders of the Baikal-Amur Railway” Yakobchuk Sergei Alekseevich was awarded the second prize for a series of thematic landscapes: BAM “,” Camp construction team “,” LenBAM “,” We went to Baikal “. Works by SA Yakobchuk: “We are building a new city (Oranges from Morocco)”, “Leningradka”, “Siberian Rowan” were sent to a youth tour and were exhibited with great success in Canada, USA, Germany, India, South Korea, Japan. On behalf of the Presidium of the Supreme Soviet of the USSR, by the Decree of the Presidium of the Supreme Soviet of the RSFSR of January 13, 1986, Sergei Alekseevich Yakobchuk was awarded the medal “For the Construction of the Baikal-Amur Main Line”. The works of SA Yakobchuk, inseparable from the history of their era, still delight viewers today, striking with the skill of execution, the life force of images and sincere conviction in the creative power of art. The works of SA Yakobchuk are in collections: the Research Museum of the Russian Academy of Arts, the State Museum of the History of St. Petersburg, the State Russian Museum, the Kursk Picture Gallery named after A.A. Deineka, the Russian State Museum of the Arctic and Antarctica, the Zoological Museum of the Russian Academy of Sciences, in the collection of the State Pskov Museum Association, as well as in private collections in Russia, Poland, Switzerland, Sweden, France, Finland, Italy, USA, Korea. 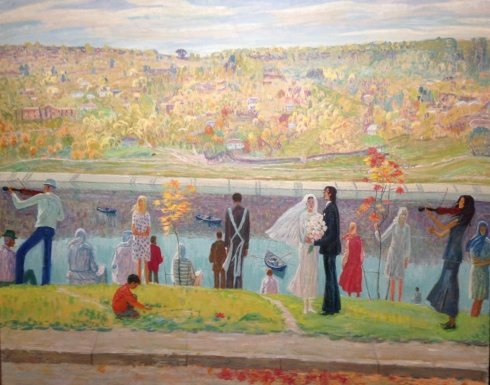