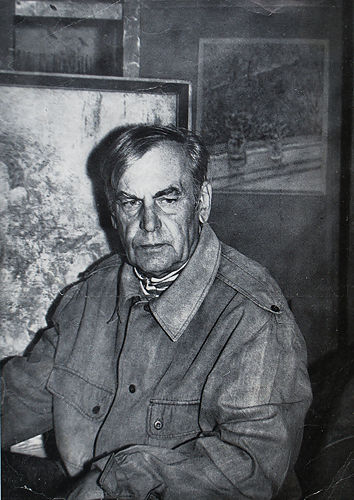 An outstanding Soviet Ukrainian painter. Honored Art Worker of the Ukrainian SSR. People’s Artist of Ukraine. He was born in the village of Varvarovka, Volchansk district of the Kharkov province on July 30, 1912, in the family of rural teachers. Children and youth spent in the city of L’viv, where he began his artistic education under the guidance of the artist. I considered a meeting with Arshinov, who graduated from the Moscow School of Painting and was close to KA. Korovin, V. Mayakovsky, A. Gerasimov, the greatest success in his life. From 1928 to 1931 he studied at the Kharkov Art College, the teachers AA. Kokel ‘, IZ Vladimirov. In 1931-1934 – a student of the Kharkov Art Institute, where he studied with MA. Sharonova, S.M. Prokhorov. In 1940 – a graduate of the Kiev Art Institute (workshop FG Krichevsky and Dmitry Shavykin). In 1939-1940 he taught at the Kharkov Art College, then at the Kharkov Art Institute as an assistant to Professor M. Kozik. He was drafted into the army in 1940, signed with the accompanying Elena Yablonska on the way to the recruiting station. Participated in the first battles on the Western Front as part of the 660th Infantry Regiment. In June 1942, was taken prisoner, and until the end of the war was in the Nazi prisoners of war camps, worked as a farm laborer from a Latvian landowner. In 1945, after the liberation from the camp, the Red Army continued to serve in the captured battalion. At the end of 1945 he was demobilized in the rank of private soldier. After the war he settled with his family in Kiev. At first he taught at the art school, then gave himself entirely to the work. He was in the republican branch of the Union of Artists, he was the chairman of the picturesque section. Elena Elena Yablonskaya, the artist, the designer of children’s books and the teacher in art schools in Kiev, is the sister of the famous artist Tatyana Yablonskaya. Children – Eugene (1946-2005) and Natalia (born 1953) Volobuyevs are also artists. He was buried at the Baykovoye cemetery in Kiev. In his work he adhered to the realistic method, which he understood deeply in his own way, for which he repeatedly attacked the adepts of socialist realism. Characteristic of the artist’s statements. “I do not what the viewer sees on the canvas, but what he takes with him.” – E.V. Volobuev Painting of recent years (with a few exceptions) is a painting of a frame, it can be talented and interesting, but it does not create a natural image, does not create its inner life. She retells existing life, these are pieces, fragments of life. It’s a reflection, not a creation. Therefore, it is naturalistic in nature. – E.V. Volobuev. Worked in the genre of easel painting. In his work, the landscape and still life are most widely represented. Among the main works of the master – “At noon”, 1947, “Spring”, 1949, “Morning”, 1954, “After the war. Light in the Windows “, 1955,” Calves “, 1955,” At the Farm “, 1957,” On the Dnieper “, 1960,” Conversation “,” From the Past “,” From the Window of the Workshop “, 1964,” In the Partisan Territory ” 1965, “Pioneers of Michurin And ..” (1970). Eugene Volobuev reveals to us one, mostly lyrical side of life of people and nature, but reveals with the depth of this giftedness and personal skill. This is an artist with his face, an exceptional creative individuality. His fresh and fresh art pleases and enriches us … – Leonid Pervomaisky. Volobuev – Sharden of our time. It is amazing the charm of things that we do not notice in life. – Nikolay Glushchenko. Liked to write old age and tender youth, the artist is close to feelings of empathy, compassion for the defenseless. At the end of the creative path, he gravitated more towards small forms and etudes. Volobuyev did not have any students and did not create a school because he deliberately avoided the standard methods. For each new work, I looked for funds, often painfully, most relevant to the task at hand. The fact is that all my life I wrote only that which worried me, and this is a great luxury. Maybe in the sense of life’s blessings I lost, I even definitely lost, but in the main, I think, I won. .. Yes, otherwise I could not. – E.V. Volobuev. Since 1938 Volobuev’s works were exhibited at republican, all-Union, international exhibitions. His works are kept in the State Museum of Fine Arts of Ukraine, the Russian Museum, in the museums of Dnepropetrovsk, Odessa, Lugansk, Zaporozhye, Chernigov, Cherkassy, ​​Kramatorsk and other cities of Ukraine, in the museums of the far and near abroad, private collections, in the Kursk Regional Picture Gallery, Lgovsky Museum of Local Lore, Lgov Literary and Memorial Museum, N.N. Aseeva. Is the author of the idea of ​​the textbook of TN Yablonskaya “Morning”, which depicts the daughter of the artist. According to the plot of this picture, not one generation of schoolchildren wrote essays. Did not go abroad the USSR, except for being in captivity in East Prussia. On the canvas “Morning” the artist marked his presence by portraying himself as a passer-by, a figure behind a green stall 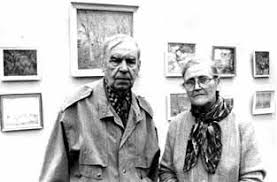