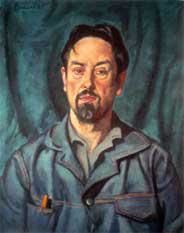 Soviet Ukrainian artist. A bright representative of the Odessa School of Painting. Vladimir Grigorievich Vlasov was born on February 5, 1927 in Odessa. In 1947 he graduated with honors from the Odessa Art College, where his teachers were L. Muchnik, N. Pavlyuk, N. Sheluto. Later he continued his education at the Moscow Art Institute. Surikov, where he studied at D. Mochalsky. In 1953, Vladimir Vlasov’s picture “Future Officers” was exhibited at the 2nd All-Union Exhibition of Graduation Works in Moscow. After graduation the artist returns to Odessa. Since 1954 he took an active part in city, republican, all-Union and foreign art exhibitions. V.G. Vlasov is a member of the Odessa organization of the Union of Artists of Ukraine since 1957. Author of numerous landscapes, portraits and thematic paintings. He was awarded with the Honorary Diploma of the Presidium of the Supreme Soviet of the Ukrainian SSR. In 1972 he was awarded the title of “Honored Artist of the Ukrainian SSR”. Works by Vlasov VG are stored in the National Art Museum of Ukraine, in the Odessa Art Museum, in museum and private collections in the artist’s homeland and abroad.