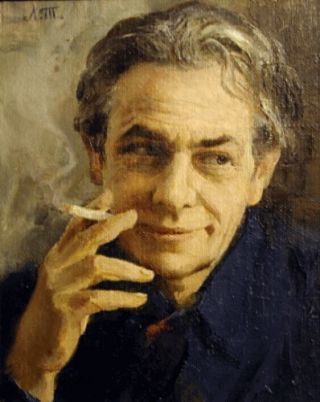 Soviet Ukrainian painter. Member of the USSR Academy of Arts. Member of the National Union of Journalists of Ukraine. He was born on April 24, 1920. He graduated from the Kiev State Art Institute (1952). Teachers on the specialty – V. Kasiyan, A. Shovkunenko. The creative destiny of Leonid Turovetsky has developed from two complementary parts: painting and drawing, more precisely reportage journalistic sketches, the main thing in which is a stopped instant, a real interest in people and life. The correspondent of the magazine Ogonyok, the news agency Novosti and the Workers’ Newspaper, L. Turovetsky, managed everywhere-to the field camp and to the open-hearth furnace, to the border guards of Transcarpathia and to the football match for the European Super Cup. L.Turovetsky is the author of illustrations for the books “The Fifth Lobe of the Lilac” by S. Kalinichev, “Tamara” by A. Khizhnyak, “The Mystery of the Sneaker”, “Difficult Eve”, etc. Particularly interesting are the portraits of M. Rylsky, O. Honchar, V. Stusa, M. Saryan, E. Evtushenko, B. Okudzhava, editor of the magazine “Peretz” Makivchuk. The publishing house “Radianska Shkola” published color reproductions from creative paintings as visual aids for schools in Ukraine. Member of NSU (1983). L.Turovetsky took part in art international exhibitions, in particular in France in 1979,1992, Japan-1980,1982,1986, Canada- 1982,1987, Belgium1987, Germany-1988. , England-1993, Italy-1991, USA-1994, Republic of Korea-1997.
The works of Leonid Turovetsky are in private collections in Japan, France, Belgium, Germany, the USA, Korea and other countries of the world. “My teachers were the unforgettable Ivan Fedorovich Khvorostetsky, Konstantin Nikolaevich Eleva, Ilarion Nikolayevich Pleschinsky, Academician Vasily Ilyich Kasyan, thanks to whom I serve in the field of art” – said the artist. In the artist’s album there were portraits of Leonid Pervomaisky, Ilya Ehrenburg, with whom he met in Moscow and the House of Writers in Koktebel, Mikhail Svetlov, Arkady Raikin, Emil Gilels, David Oistrakh, Maxim Rilsky, Martiros Saryan, Bulat Okudzhava, Yevgeny Yevtushenko and many others.