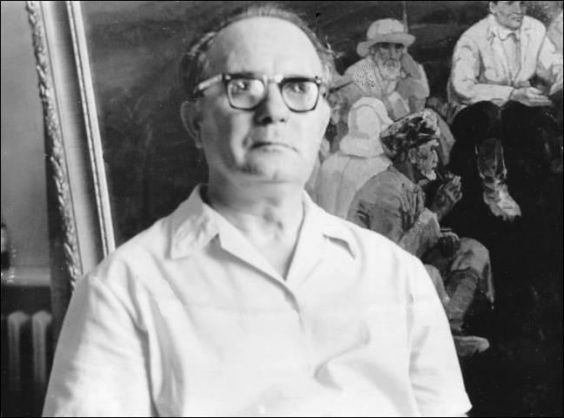 Soviet painter. Member of the USSR Union of Artists. Honored Artist of the Kabardino-Balkarian ASSR. He was born in the village of Chetvertinovka, Vinnytsia region (Ukraine). He studied at Makeyevsky Artistic Workers’ Faculty and Lugansk Art School, where he entered in 1934. In 1941, he became one of the first representatives of Kabardino-Balkaria, who took part in the All-Union Exhibition of the Art of Young Artists in Moscow with his landscape “In the Evening”. The Great Patriotic War was coming off. Tryndyk, working as the head of the art department of the newspaper “Kabardino-Balkarskaya Pravda”, simultaneously draws for “TASS windows”, writes slogans, posters, appeals. Since 1942 he at the front – liberated Nalchik and other cities of the North Caucasus, Ukraine, participated in the Iasi-Chisinau operation, reached the capital of Bulgaria, Sofia, where he graduated his military path. N.Z. Trindyk was awarded numerous military awards. And at the front at the free moment he took up his brush and pencil. The theme of the war was present throughout his further creative life. Demobilized in 1945 after the Victory, the artist returns to Nalchik. He works as the head of the art department of the newspaper “Kabardino-Balkarskaya Pravda”, in the sculpture and art workshops of the Department of Arts, combining all this with persistent creative activity. In 1955 N.Z. Trindyk was admitted to the Union of Artists of the USSR. Member of the republican, zonal, Russian, all-Union exhibitions since 1939. Personal exhibitions were held in Nalchik in 1961, 1967, 1976, 1986.