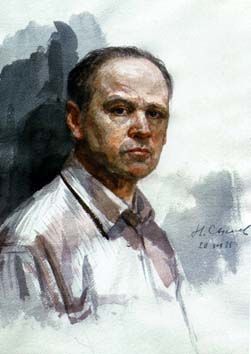 Soviet painter. Honored Artist of the RSFSR. People’s Artist of Russia. From 1934 to 1938 he studied at the Moscow Artistic and Pedagogical School in memory of 1905 from P.D. Pokarzhevsky, V.V. Favorsky. In 1938, without exams, he entered the Moscow State Institute of Art. IN AND. Surikov, who finishes in the workshop of Professor Pokarzhevsky in 1948 with the thesis “Traitor”. For his excellent studies he was awarded a creative trip to the “Academic Dacha” by I.E. Repin and was accepted into the Union of Artists of the USSR. All-Union fame for Nikolai Sysoev was brought by the works of V.I. Lenin and N.K. Krupskaya among the peasants of the village of Gorky in 1921 “,” VI. Lenin on the Communist Saturday in the Kremlin on May 1, 1920, “” Collectivization. ” In 1987 he founded the Lipetsk region. (the village of Leo Tolstoy) Picture gallery, which today bears the name of the artist. Personal exhibitions of the artist were held in Moscow (1979, 1980, 1988, 2002), Leningrad (1981), Tver (1981), Lipetsk (1990, 2001). The works are kept in the State Tretyakov Gallery, the State Historical Museum, the Tver Art Gallery, the Tula Regional Art Museum. “Nikolai Alexandrovich Sysoev received his initial art education in the Moscow Art College in memory of 1905 (1934-1938) .This time, the teaching of painting and drawing was very good there, the creative atmosphere reigned, and the students were eager to learn.In the enthusiasts who were engaged literally morning to night, there was also Nikolai Sysoev, he stood out for his giftedness, curiosity and love of work, performing countless sketches and drawings in excess of the compulsory program greatly helped him in his studies. After finishing his technique and enrolled in the Moscow State Art Institute (now named after VI Surikov), the future artist continues with the same zeal to comprehend the secrets of mastery.In the institute headed by IE Grabar, the students were brought up in the spirit of consistent realism, therefore both painting and drawing required a full-blooded, as close as possible to convey life and nature.Nikolai Aleksandrovich to this day remains true to these principles. Even in the years of study his tastes and affections were determined. Infinitely loving and admiring the great masters of the past, he felt the closest Russian artists to himself, and, first and foremost, I. Repin and V. I. Surikov. In 1947-1948, near Vyshny Volochka, the House of Artists “Academic country house”. Among the first artists who started to work there, there was also NA Sysoev. Later, having met local residents, many of whom later became heroes of his paintings, and subjugated by the beauty of the surrounding nature, Nikolai Alexandrovich settled in the nearest village where he built himself a workshop. Since then, he has been living there and working almost continuously. The content of his works is the life of the collective farm village. He painted pictures of both her peaceful work and life, and the hard years of wartime. All of his paintings were created on local material. The prototypes of the heroes were villagers and residents of nearby villages. Therefore, Nicholas Alexandrovich is literally known to everyone in the district, and some of the houses have reproductions of his paintings on which they are depicted. NA Sysoev wrote several paintings on VI Lenin. In all the paintings, Lenin is depicted among the people, surrounded by people, close to them, simple and humane. The picture “V. I. Lenin and NK Krupskaya among the peasants in the village of Gorki. ” In my opinion, this is one of the best works about Lenin in Soviet painting. The most attractive aspect of Nikolai Alexandrovich’s art is his sincerity. And this sincerity conquers in the picture. You believe in the authenticity of everything captured here: a beautifully painted landscape, and images of peasants, and images of VI Lenin and NK Krupskaya. And how good the sleigh with the young driver on the left side of the picture! Clean rugs covering the sleds, and glow in the reflex of the snow! In the picture there is a special structure inherent in all the canvases of Nikolai Alexandrovich, and at the same time the traditions of Russian art that he continues are visible. Working on paintings, Nikolai Alexandrovich always writes many preparatory sketches. Often, one figure is returned several times, seeking the solution he needs. Many of these sketches due to the skill of execution have an independent artistic value. In the landscapes of NA Sysoev, love for the native nature is seen. He perfectly conveys her mood and condition at any time of the year. With love he writes villages, sheds, copses – all the low-key beauty of our places. Nikolai Alexandrovich can often be seen working in the open air: and early in the spring at the running, gurgling stream piercing through the snow, and in the summer in the forest at the moss covered with moss, and in the autumn among the gold birches, at the sparkling dark blue lake. He is an indefatigable worker and poet of our native land. “- People’s Artist of the USSR, member of the Academy of Arts of the USSR, laureate of the USSR State Prize and the RSFSR State Prize of the Russian Federation 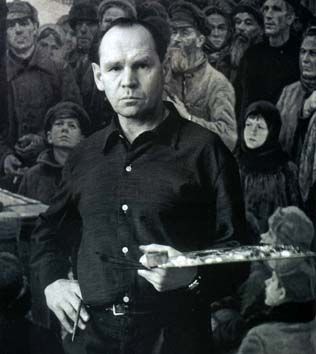 Photo: N.A. Sysoev in the work on the picture “Collectivization” 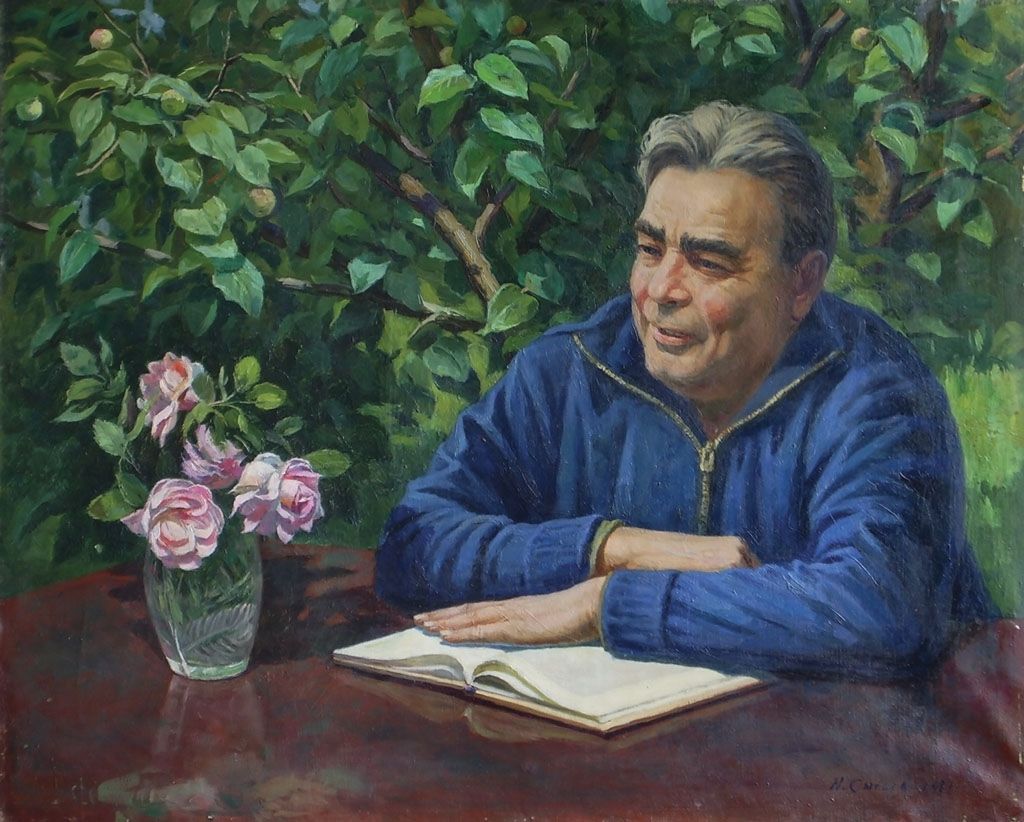 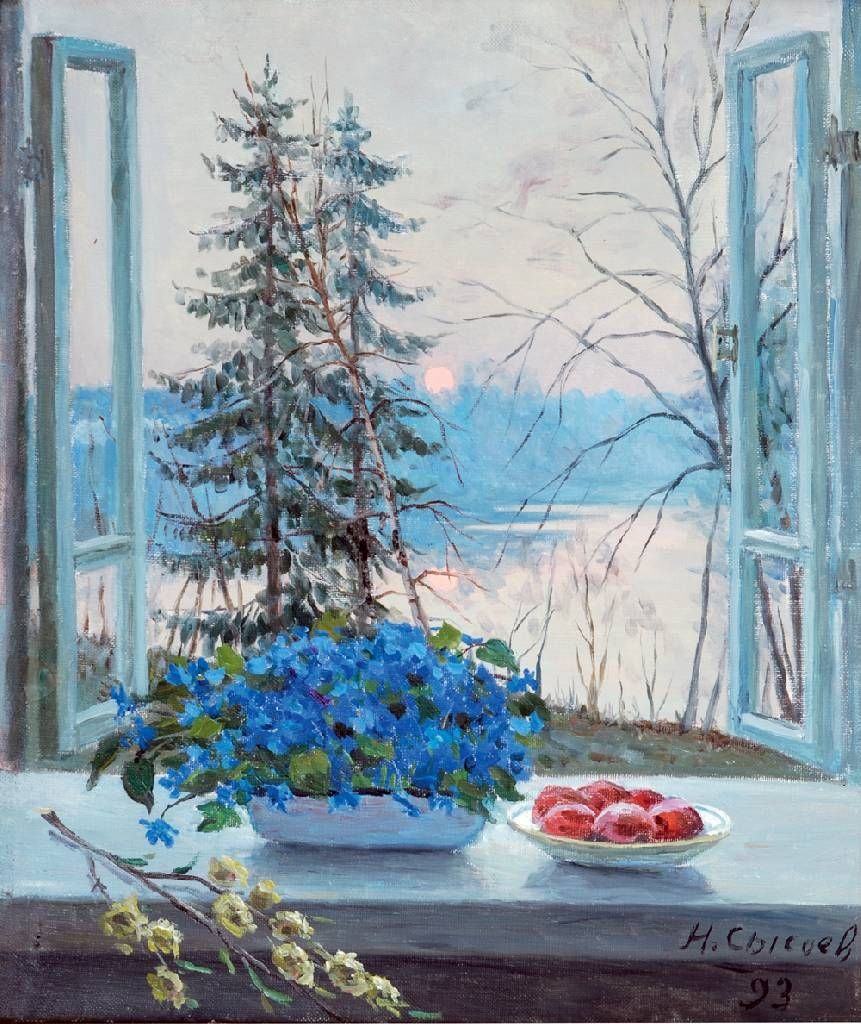