Soviet Ukrainian painter, graphic artist. Member of the USSR Academy of Arts. He was born on April 7, 1907 in Gomel. He studied at the Gomel Art School. M. Vrubel, in the Leningrad Art College, and in 1926-1929. – in the Leningrad All-Russian Academy of Arts; his teachers of painting were A. Rylov and V. Svarog. The military service interrupted his artistic activity, but since 1935 Veniamin Siper has started active creative work at Leningrad, and later, the Kiev film studio as an animator, and also collaborated with a number of publishing houses as a book illustrator. During the Great Patriotic War, as an officer of the Soviet Army, V. Siper spent all his years at the front, commanded the headquarters of an artillery battalion, was awarded four military orders and numerous medals. After demobilization in 1946, he lived and worked in Lviv. His closest friends in Lviv were artists Leopold Levitsky, Mikhail Leschiner and Senya Gruzberg. The artist’s studio was an open space for acquaintance and communication, so Veniamin Siper crossed with a circle of young representatives of the Lvov underground from the 1970s to the 1980s, for example, with Alexander Aksininim. He worked in the easel painting industry. The main works: “Lviv. Powder Tower “(1956); “Lviv. Area of ​​the Association “(1957); “Evening in Volhynia” (1960); “Lviv. Lenin Avenue (1961); “Lviv. Boulevard Pervomaisky »(1964) and others. Participated in republican exhibitions since 1957, personal – Lviv, 1957. Awarded the Order of the Patriotic War 1st and 2nd degrees, two Orders of the Red Star and medals. 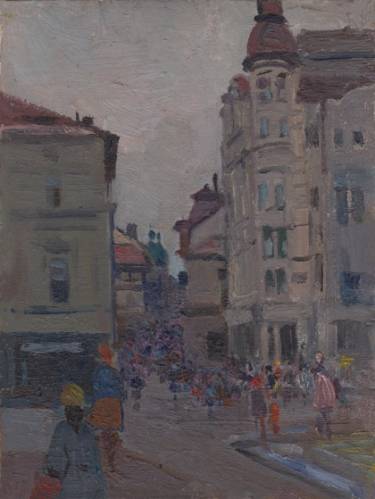