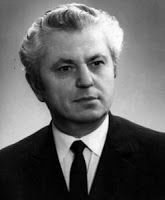 Ukrainian Soviet painter. Honored Worker of Culture of the Ukrainian SSR. Born Stepan Vasilievich in with. Oleshnik Vinogradivsky district in a large family peasant family. Together with his brothers he studied at the Vinogradovo City School. Then – Uzhgorod Teacher’s Seminary. In the Soviet years he graduated from the Faculty of History of the Uzhgorod State University. He began to draw from his early years. He was fond of picturesque landscapes, sights of ancient Transcarpathian sacral architecture. He was engaged in a circle of young painters, led by the priest Zoltan Sholtes, the future great master of the brush, Honored Artist of Ukraine. In the teachers’ seminary, Stepan Vasilyevich showed himself to be a diligent and intelligent boy. The theoretical course of fine art was held under the direction of one of the founders of Transcarpathian school of painting A. Erdeli. The Transcarpathian painters, in particular the People’s Artist A. Kashshai, had a great influence on the creative growth of S.Sigetya. Stepan Vasilievich – a participant in the Great Patriotic War. An activist of the youth movement in Transcarpathia in the post-war years. Elected secretary of the Komsomol organization in his native village, in December 1944 was a delegate of the first congress of the Union of Youth of Transcarpathian Ukraine. About 25 years he headed the department of Intourist in Uzhgorod. On his initiative and under his leadership in Uzhgorod a hotel “Transcarpathia” was built. He became the director of this hotel. Regularly exhibited at regional and republican art exhibitions since 1979, not only in Transcarpathia, but also in Armenia of Slovakia, Hungary, the USA. The first personal exhibition of works of Sigetia took place in 1982 in the village of. Oleshnik. For a fruitful work awarded with government awards: the Order of the Badge of Honor (1966), Bogdan Khmelnitsky, 3rd Degree (1999) and medals “For Valiant Labor in the Great Patriotic War 1941-1945” (1948), “For Courage” (1971) ), “Zhukov Medal” (1998), “Defender of the Fatherland” (1999), but others. In 1981 he was awarded the title of Honored Worker of Culture of the Ukrainian SSR. He was awarded the Bishops’ Certificate “As an expression of gratitude for the preservation of the cultural heritage of our region under the Carpathians” (2007). In 2008, the Ministry of Defense of the Slovak Republic was awarded the medal “The Difference of a Military Veteran”. Died SV Sigetic on January 3, 2014, at the age of 88.

Photo: Work of artist’s brush “Church in the village of Kolodna”