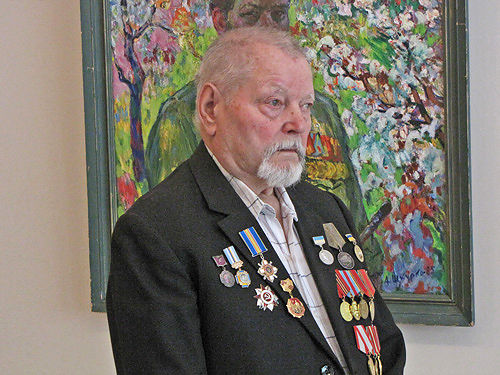 Soviet Ukrainian painter. People’s Artist of Ukraine. Member of the USSR Academy of Arts. Anatoly Nikiforovich Shkurko was born on October 29, 1924 in the village of Smolin in the Chernihiv region. Since 1930, the artist’s family moved to Chernigov. In 1939, Anatoly Shkurko entered the Kharkov Art College, but the war stopped the training. Member of the Great Patriotic War. In the 111th Streltsy regiment of the 1st Byelorussian Front, the future of the soldier’s way from Lyubech to Berlin. He was awarded orders and medals. From 1946 to 1951 he studied at the Leningrad Institute of Painting, Sculpture and Architecture. I. Repin Academy of Arts of the USSR. His teachers were: R. Frenz, D. Olkhovsky, I. Sorokin. Worked in the field of easel painting – thematic painting, landscape, portrait. Since 1960 – a member of the Union of Artists of Ukraine. Shkurko A.N. participant of art exhibitions: republican – since 1954, all-Union – since 1961. Held many personal exhibitions. Honored Artist of Ukraine since 1996. In 1996 he became a laureate of the Chernihiv Oblast Prize named after. M. Kotsyubynsky. In 2009, Anatoly Shkurko Nikiforovich was awarded the title of “People’s Artist of Ukraine.” Works by A.N. Skurko is represented in the Chernigov Art Museum, galleries and private collections in Ukraine and abroad. The picture was presented at the exhibition “People’s Artists of Ukraine”, dedicated to the 20th anniversary of Independence of Ukraine and held from August 22 to September 4, 2011 in the “Ukrainian House” in Kiev.