Soviet Tajik artist, monumentalist, painter. People’s Artist of the Republic of Tajikistan. He was born on May 9, 1946. Sharipov Sabzali (09.05.1946), the painter is a monumentalist, People’s Artist of the Republic of Tatarstan, Honored Artist of Tajikistan (1987), laureate of the State Prize. A. Rudaki, State Prize of the Council of Ministers of the USSR (1988), member of the Union of Artists of Tajikistan (1977), honorary member of the Academy of Architecture and Construction of the Republic of Tatarstan (1996). He graduated from the Republican Art College. M.Olimova (1967) and the Tashkent Theater and Art Institute. N. Ostrovsky (1972). The main monumental works of Sharipov Sabzali are: the complex artistic decoration of the hotel “Tajikistan” (1975), the State Circus (1978), the Palace of Trade Unions (1979, co-authored with S. Nuriddinov), “Kokhi Borbad” (1984, in co-operation with V. Odinayev and A. Safarov), a mosaic panel on the facades of the market “Barakat”; The reconstruction of the artistic design of the Academic Drama Theater. A. Lahuti (1989-2003), foyer of the National Library (2012), etc. The main paintings: “The Garnet Garden of My Grandfather” (1976), “Seeing Off” (1977), “The Land of Rogun” (1980), ” (1991), Usto Nuriddinov (1991), The Uprising of Vose (1986), Ustod M.Olimov (1991), Black and White (polyptych, 1992, 94), Lunolikaya (1993), Bahori Ustod Loik (2000), Callahoioustod Muminosho (2002), a cycle of portraits of outstanding figures of Tajik culture and art, and others. Personal exhibitions: Moscow (1980), Nicosia, Cyprus ( 1984), Kabul (1986), Dushanbe (1996), Bonn (1997). His works are in galleries and museums of Tajikistan, Uzbekistan, Russia, Hungary, Poland, in private collections in the USA, Germany, Switzerland, Moscow, Tashkent, Dushanbe. In 1992 he was invited to the Tajikfilm film studio as the production director of the film “Afternoon and the Stars Shine Over the Tanur” by Sayf Rahimzod (Afardi), who subsequently participated in a number of IFFs and received prizes. One of the founders of the creation of video art in Tajikistan. Since 2004 – the main artist of the International Film Festival “Didor”. In 2004 he was a member of the jury of the IFF “Didor”. The many-sided activity of Sharipov encompasses many aspects: he created mosaics as a monumental artist, many buildings in Dushanbe are decorated with his hands; worked as a production designer at the Tajikfilm studio; is the author of the illustrations to the book by Ch. Aitmatov “Burannyi polustanok” (“And more than a century lasts a day”), etc. In easel painting, SN Sharipov works as a monumental artist, using large color planes (“Vulture”, “With white mark “, 1994), brush strokes or palette knife as if laying out a mosaic panel on canvas. He often uses the contrasts of light and dark, bright and muted colors, likes to “push” the reflecting all colors white and absorbing black, next to which bright stained-glass windows, enamels sparkle with blue, red, orange and other colors. On this confrontation, often not only the color composition of works is based, but also their emotional and dramatic component. An alarming feeling is caused by “Cotton boxes (Black Cotton)” (1988), where people, similar to robotic mannequins, wander along the glittering lights of the road. In this work, the artist continues a difficult conversation on the subject of cotton, started by “Khirman (Mirage)” Zukhura Khabibullaeva. As if the alarm sounds here bright expressive colors and restless-dynamic lines. The canvas, like many other works by Shiripov, captures the viewer with his spatial power and epic spirit. Various associations cause decorative by color, the rhythm of the spots and at the same time the symbolic work on “The Rape of the Red Bull” (2010), apparently inspired by the legendary plot of ancient Greek mythology “Abduction of Europe”. But unlike many paintings on this motif the artist treats it quite differently. Among the broken trunks of trees resembling human figures, a fragile woman leads to the chains of a huge bull. The composition, undoubtedly, is permeated with the tragic attitude of the times of the civil war in Tajikistan. And is not this terrible red bull being perceived by the symbol of bloodshed, and leading him (beyond the canvas)

Photo: Most of the paintings of Sabzali Sharipov dedicated to his mother 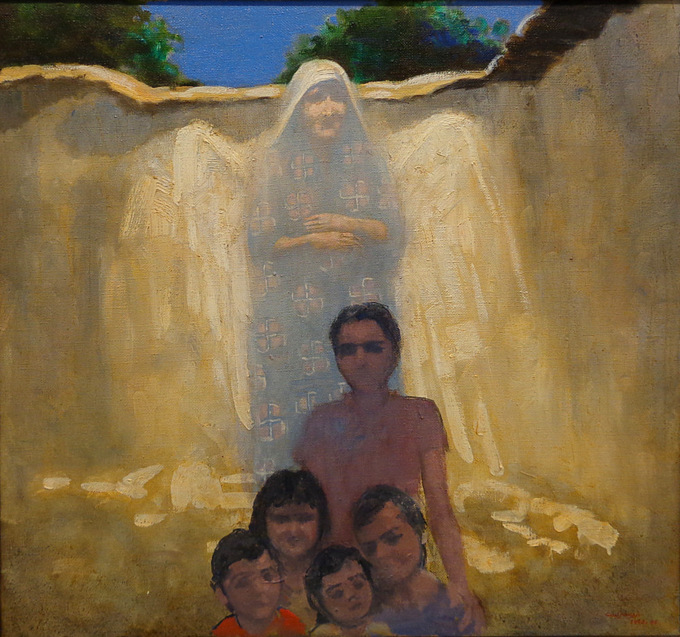 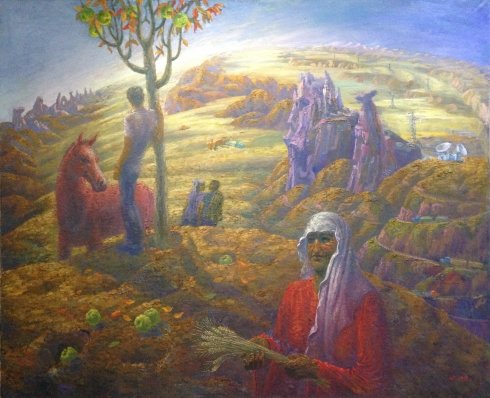