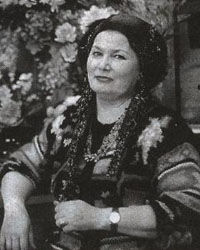 Soviet Ukrainian painter. Member of the USSR Academy of Arts. Serafima Fedorovna Senkevich was born on May 1, 1941 in the village of Olikshany in Moldova. In 1961 she graduated from the Painting Faculty of the Chisinau Art School named after. Repin. The teachers in the specialty were Okushko RV. and M. Ryasnyansky. At the same time, continuing the family tradition (parents were famous carpet weaving masters), she mastered applied art. Since 1960 he took part in art exhibitions, and in 1963 – the works of Serafima Fedorovna were selected for the All-Union Art Exhibition. Since 1961 – member of the Union of Artists of Moldova.
In 1963 the first solo exhibition of Senkevich took place in Chisinau. In 1970, the artist moved to Nikolaev and became a member of the Nikolaev organization of the Union of Artists of Ukraine. Master of landscape, portet and still life. On her initiative, a club of women artists was organized, an exhibition hall was opened at the Mykolayiv branch of the Kyiv-Mohyla Academy. In 1993, Serafima Fedorovna Senkevich was awarded the title of Honored Worker of Culture of Ukraine. Numerous solo exhibitions were held in Nikolaev and Kiev. Her works are presented in museum and private collections in Ukraine, Moldova, Russia, Hungary, Slovakia, France, Germany, USA, Japan and others.