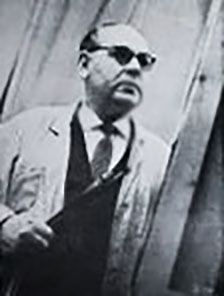 Soviet Ukrainian painter and graphic artist. Honored Art Worker of the Ukrainian SSR. Member of the USSR Union of Artists. Victor Markiyanovich Savin was born on February 13, 1907 in the village of Zavadovka in the Kirovograd (now Odessa) region in the teacher’s family. Children and youth of the future artist were held in the city of Izium in the Kharkiv region. From 1924 to 1927 he studied simultaneously in Kharkov Art School and Kharkov Art Institute. His teachers were: I.Dubasov, S.Prokhorov, A.Kokel. From 1927 to 1929 he studied at the picturesque studio at the Central House of Arts in Leningrad at Yu. Cheptsov and I. Brodsky. Since 1932, Savin V.М. – participant of republican, all-Union and foreign art exhibitions. Worked in the field of easel painting and graphics. Member of the USSR Union of Artists. He was engaged in pedagogical activities in the Ukrainian Printing Institute in Kharkov. In 1939 he was appointed assistant professor. After the end of the Great Patriotic War, a new polygraphic institute was created in Lviv, the successor to the Kharkov Institute. V.M. Savin perezzhaet to Lviv and continues to teach. Victor Markiyanovich Savin worked fruitfully in the book graphics. They performed masterful illustrations to Ukrainian fairy tales, to the trilogy “Shlyakh na Kiyiv” SD Sklyarenko, novels and stories of N.Trublaini, etc. The personal exhibition of the artist was held in 1959 in the Lviv Museum of Ukrainian Art. He was awarded with the Certificate of Honor of the Presidium of the Supreme Soviet of the Ukrainian SSR. In 1964 he was awarded the title “Honored Artist of the Ukrainian SSR”. Member of the CPSU. He worked in the field of easel painting and easel graphics. The main works: “The first tractor column in the village” (1930); “Karmalyuk” (1937); “And .. Stalin and NS Khrushchev” (1939), “In slavery” (1947); “The university graduated” (1954); “1919 year” (1957); “Early life of the Carpathians” (1963); “… there will be truth on earth ..”. (1964); “AT. I. Lenin and V. Chubar “(1967) and others. Participated in exhibitions: republican since 1932, all-Union since 1939. The artist died on June 9, 1971 and was buried in the Lychakiv cemetery in Lviv. The works of Savin V.М. are stored in the Lviv Museum of Ukrainian Art, the Kirovograd Memorial Museum. MLKropivnitsky, Kharkov Art Museum, in gallery and private collections in Ukraine and abroad.

Picture 2: “Viktor Markijanovich Savin”. Catalog of the exposition. Lviv branch of the Union of Artists of the USSR. Львів, “Каменяр”, 1968 рік