Soviet Ukrainian painter. Member of the USSR Academy of Arts. Honored Worker of Arts of Ukraine. Assistant professor . He was born on January 10, 1927 in the village of Savintsi, Kharkov region. He studied: “Kiev Art Institute” (1953). Teachers by specialty – S. Grigoriev, V. Kostetsky. He worked in the easel painting industry. Honored Art Worker of the Ukrainian SSR (1964). He was awarded the Diploma of the Presidium of the Verkhovna Rada of the Ukrainian SSR. He taught: “Kiev Art Institute” since 1964. Associate Professor (1967). Participated in exhibitions: republican since 1951, all-Union since 1957. The main works: “Happy Father” (1951); “The Village Teacher” (1952); “Reception to the Pioneers” (1953); “Motherhood” (1957); “Storks” (1960); “The Native Land” (1963); “Eternal Fire” (1964 – 1965); “A handful of earth” (1967) and others. His works are kept in private collections in Ukraine and Europe. Lived and worked in Kiev. He died on June 27, 1982. The author of the widely known painting “Storks” in 1960 on the topic of which the school program wrote numerous works by students about the native land and nature. I. Tikhogo is called an animal master, that is, an artist gifted with talent to depict birds and animals. Other important themes of his paintings are love, nature, a small homeland, a person. His paintings are distinguished by expressiveness of images, harmony, compositional unity. The painting “Storks” is a real song of love for the native land. In his work I. Tikhiy used only two basic colors – green and blue. But they were enough to portray a peaceful sky, a summer field, distant bushes and trees, soaring up the storks. Birds are drawn very detailed and naturalistic, behind each feather, a wave of the wing can be guessed force, movement, power. The typical nature of the middle belt of Ukraine, where the artist comes from, does not seem boringly monotonous to the eyes of the viewer, but full of life, feeling, joy. A bright summer day is a space, a symbol of an open road for any citizen of his country. Storks create an allusion to its inhabitants: strong, free, capable of flying. As proud birds rise from the ground, so the Soviet man was available any heights. I think that Ivan Antonovich Tikhiy put this very hidden meaning in his picture. Perhaps, this modern man lacks this will, fullness and peace. And that’s why she wants to be examined for a long time, looking at every detail, envying the Soviet citizen in some way from a distant, forever-gone past. His works are widely represented in many public and private collections in Ukraine and abroad. They are extremely rare and well-deserved. 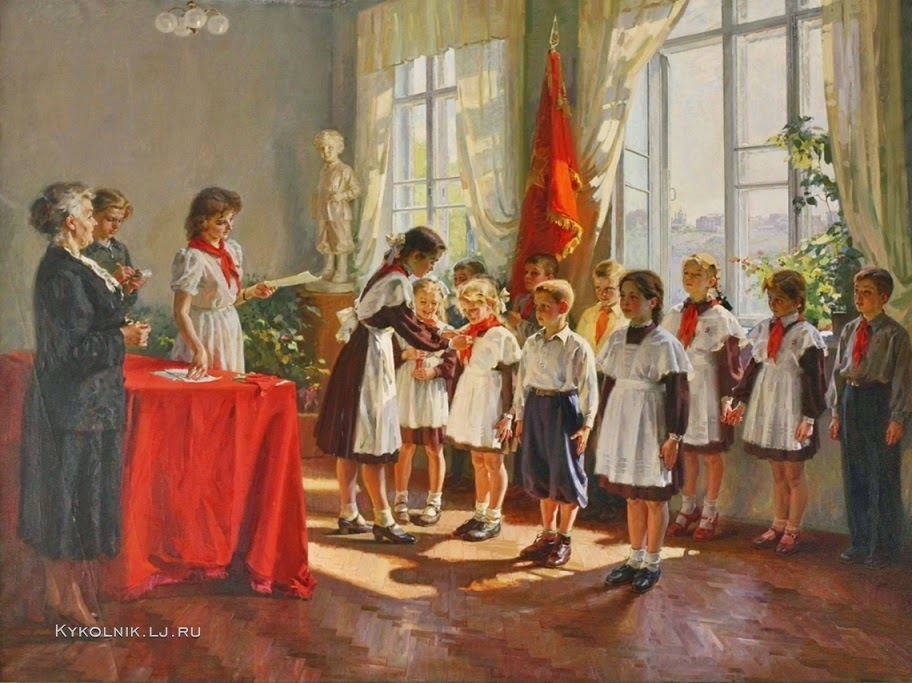