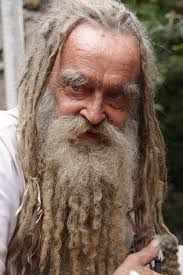 Ukrainian artist. He was born in 1941. The artist from the flow of nonconformists of the 70-80s, who is called “the last of the hippies”. Until the age of 50 he was engaged in heavy physical labor: he worked as a bricklayer, a stoker in a blacksmith’s shop. At the same time he worked part time in Grekovka (Odessa Art School named after MB Grekov) as a model. There it was imbued with artistic spirit.
A student of Alikberov Vitaly. Since the 1970s he is known in Odessa as a nonconformist artist and poet. Exhibitions and albums took place and success. Creativity Gennady Podvoisky reminds a certain mystery, a certain symbolism. Hence the names of his creations: cryptograms (cryptography). In his works he goes into obscure at first glance details: the paw of the dog goes into the wings … and then a mussel form appears … It is worth thinking about … The last works are the Universal Web, the connection with everything. Here the image of the artist is revealed. He is the symbol of a hermit and renegade, “the last of the hippies.”
Podvoisky is our, the Odessa, the forerunner of the fashionable American movement “down shifting” – “reconsideration”, a return to the natural way of life!