Soviet Ukrainian artist of arts and crafts, ceramist., Sculptor. Member of the USSR Academy of Arts. He was born on October 17, 1940 in the village of. The mines. In 1964 he graduated from the Lviv Institute of Applied and Decorative Arts (1958-1964). Teacher – Zvirinsky K.I. Since 1967, the artist of the monumental shop of the Lviv Art Industrial Complex. More than forty years of engaged in sculpture and much longer – drawing. Samples of his works can be seen in Lviv, Truskavets, Khust. In 2006, the collective of the culturological magazine “I” was awarded “For intellectual achievement”, and in 2003 – has the difference “Galician Knight”. Major works: The relief panel for the house of culture of the sugar arch in Dubno. Decorative dishes “Tree of the World”, “Gardener”, “Olexa Dovbush”. The relief in the Lviv cafe “Ice Cream”. Composition “Round table”, ceramics. Around the round table there are 12 stylized human figures – it’s like an important meeting. It is interesting that the plane of the table is divided into four different colored sectors, which can be interpreted as a difference in the views of individuals. The “street” of the robot is made in a painted tree. On the long pole, the artist places a dozen carved from the tree of passers-by. These are male, female and children’s figures – a lady under an umbrella, a man carrying a ladder, another leading a dog, another carrying a cock. All go in one direction. Feature of the work is that every “passer-by” comes back in his nest and they already “go” to each other for a meeting. “Noah” (1972) the work is dedicated to the master of folk ceramics Ilyuk. At the bottom of the “bowl”, which symbolizes the ark, stands a nude figure, and on the edge of figures of different animals. They are made in the form of whistles. “Carols” (1979). The work is carried out in the form of a kink. On the walls of which are stylized figures of carols. The handle is made in the form of a snake, and the lid is in the form of a candlestick. “There were cows from oak groves” (stone mass, enamels, 1979). The composition is solved in the form of a krynka, along which a dark green paint is painted. The image of the landscape and animals is served stylized by local spots. The rhythmic movement of which reproduces the mood of a summer evening. “Daniel of Galich” (1973). The figure of the prince is placed on an inverted bowl with wide edges, which symbolizes the mountain under which the new city will grow. The figure is executed without observing the real proportions – the author tried to convey not the external similarity, but the psychological state of a person tired, numerous campaigns and battles. The emblem of the Ukrainian Society for the Protection of Monuments of History and Culture (1969). The emblem is located on the facade of the house No. 18 on the Market Square in Lviv. Made of chamotte and decorated with watering. The work is solved in a lively, humorous way. In the center of the composition – a symbolic figure “guards of antiquity”, which has in his hands a bartk and a shield with a wooden monument of architecture. The figure is solved laconically approximately to images on tiles in dynamic motion. Decorative elements of the environment are made in the form of a baroque cartouche. Decorative sculpture “Lyrnik” for the concert hall “Lira” in Vladimir-Volynsky (1989, chamotte,). Competition project of the memorial on the site of the Yanovskii concentration camp (1988, co-author A. Skop). 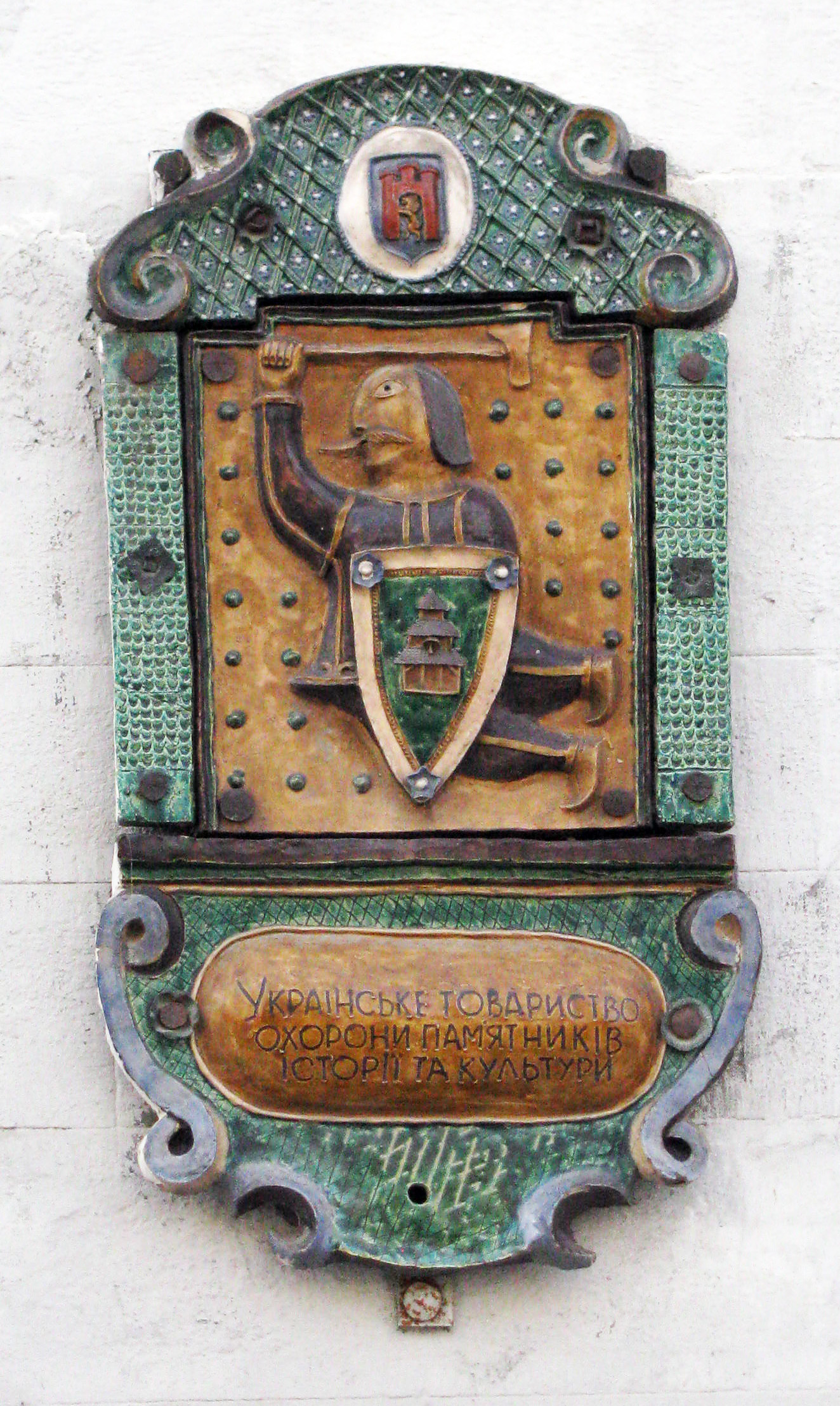