Soviet Ukrainian painter. Member of the USSR Academy of Arts. A bright representative of the Zaporozhye landscape school. Nikolay Aleksandrovich Pashkanis was born on May 23, 1923 in the village of Mironovka of the St. Petersburg district of the Saratov region in the family of an employee. In 1953 he graduated from Kharkov Art College, where his teacher was LA Shmatko. After graduation, he moves to Zaporozhye. Member of the Great Patriotic War, has awards. The creative biography of the artist began in 1953, when a 30-year-old graduate of Kharkov Art College started working in Zaporozhye. Behind was the hard years of war with the fascist invaders. They may have forever determined the seriousness with which Nikolay Pashkanis treated the work. Since 1960, he began to participate in republican and foreign exhibitions and in 1967 became a member of the Union of Artists of the USSR. Edge of permafrost. White and Barents Sea. Arctic tundra. The Karelian Isthmus. Here, among the toilers of these glorious places, he drew inspiration for his creativity. The severe beauty and majesty of northern nature NA Pashkanis sees and perceives in interrelation with people: “At the fishermen’s settlement” (1975), “Gray day. (1975), The White Night (1975), The Village near the White Sea (1975), The Parking of Icebreakers (1977), and others. Man was able to conquer the elements, he learned to appreciate and understand its amazing beauty. Creativity of the artist developed in the traditions of socialist realism. Poetic world perception has determined the special role of the landscape in the painting of N. Pashkanis. Many of his works were written under the impression of traveling to Karelia: “The Beginning of Autumn (Karelia)” (1976), “Autumn Forest” (1978), “Spring on Lovozero” (1968), “Windy Day” (1976), etc. Author deeply and subtly feels nature, skillfully knows how to portray it. On the artist’s canvases are autumn trees in scarlet robes, transparent lakes, stern cliffs … Relief smears the artist conveys the trembling of leaves under the gusts of the wind, the mobility of the water surface. In his romantic landscapes, a deep sense of deep love for the native nature is clearly expressed. N. Pashkanis delicately felt the state of the natural motive, especially the lighting, depending on the time of day, from the seasons. His paintings and sketches “speak” about it, differing by various and carefully thought out compositional decisions. The artist’s works are presented in museum and private collections in Ukraine and abroad. 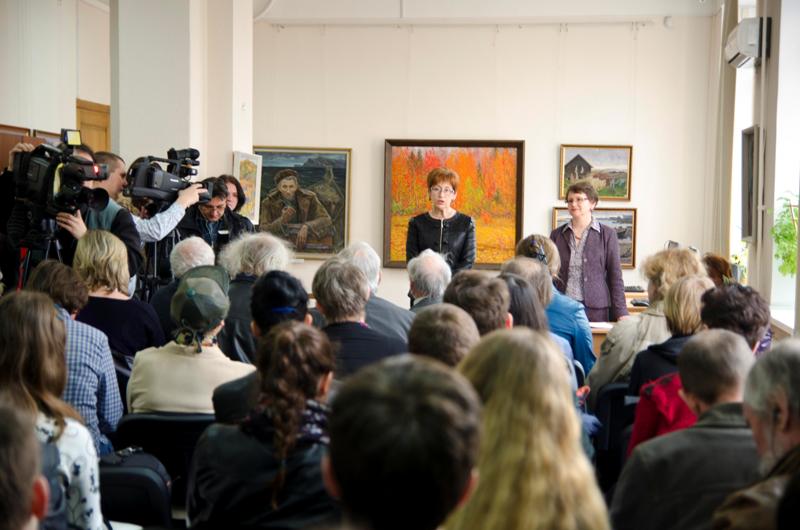 Photo: N. Pashkanis exhibition in the Zaporozhye Art Museum dedicated to the 90th anniversary of his birth

Photo: N. Pashkanis exhibition in the Zaporozhye Art Museum dedicated to the 90th anniversary of his birth