Soviet Ukrainian painter. Honored Artist of the USSR. Member of the USSR Academy of Arts. Born April 30, 1919 in the village. Ivanovka, Poltava region. He graduated from the Kharkov Art Institute in 1950, studied with S. Prokhorov, A. Kokel, I. Daits, S. Besedin, G. Tomenko. Member of art exhibitions since 1951. Member of the Union of Artists of the USSR in 1960. Honored Artist of the USSR (1972). Member of the Great Patriotic War. He began his creative activity at the end of the war. He was awarded the prize of the Young Guards. Igor Panich participated in All-Ukrainian and All-Union exhibitions, in particular, in the All-Union Exhibition in Moscow in 1951. He has more than 20 exhibitions on his account. The artist’s works are in many museums, including the Lugansk Art Museum, as well as in private collections in Ukraine, the United States, Canada, Great Britain. 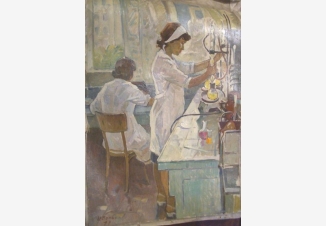