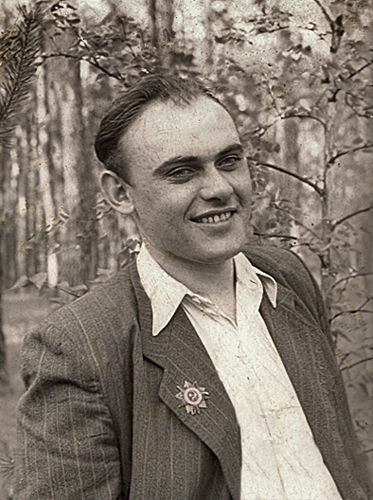 Odayinik Vadim Ivanovich is a Soviet artist. People’s Artist of the Ukrainian SSR (1978). Honored Artist of the USSR (1971). Laureate of the State Prize of the USSR (1975). Vadim Odainik belongs to the generation of painters who worked during the so-called “thaw” period from the second half of the 50s to the end of the 70s. Vadim Ivanovich was born on July 29, 1925 in Odessa. At the age of five he moved with his parents to Kiev. During the Great Patriotic War, at the age of 17, he went to the front and was a tank mechanic in the 4th Panzer Army. In 1946 he graduated from the Kiev Art Institute (he was a student of I. Shtilman, S. Grigoriev, V. Kostetskiy, K. Yeleeva). In November 1949, a picture of a young artist was exhibited at the 10th Ukrainian Art Exhibition held at the State Museum of Ukrainian Art and the State Museum of Russian Art in Kiev. In 1952, Odaynik graduated from the institute, and his thesis “Dear guests” was exhibited at the 11th Exhibition of the Art of the USSR. Vadim Ivanovich became a member of the Union of Artists. The phrase of Vadim Odaynik: “My wife is my first love, and the Carpathians is the second” became “winged.” Every spring and autumn, among the Transcarpathian nature, the artist gave the material that later turned into landscapes in the Kiev studio: “Winter in the Carpathians”, “Blue Psel”, “Rain in the Carpathians”, “On the Meadow”, “Hay Fruit”, “Celebration” in the mountains “,” Mostok. Carpathians “,” Road to Kosiv “,” Black Tisza “, and a large number of variations under the general name” Carpathians “. In 1971 Odaynik was awarded the title of Honored Artist of Ukraine. Somewhat later, for the genre paintings “Tristae music”, “Red Forge”, “Spring” and “Hutsul wedding”, he is awarded the State Prize. Shevchenko. For the work “Tristy Music” he was awarded the title of People’s Artist. In 1979 the album “Vadim Odaynik” was released, dedicated to the artist’s work. The works of Vadim Ivanovich Odaynik are represented in the State Tretyakov Gallery, the galleries The Matue and The Chambers Gallery (England), Kyushu and Gekoso (Japan), in the National Art Museum of Ukraine, in museum and private collections in Ukraine , Austria, USA, France, Korea, Italy, Poland, Japan and other countries. In July 2013, the Zaporozhye Regional Art Museum hosted an exhibition of paintings by the Odayinikov family called “The Art Dynasty of Ukraine”. At the exhibition, 17 paintings from the museum’s fund, created both by Vadim Odaynik himself and his children – honored artists of Ukraine Sergey and Oksana, and also Sergey’s wife – Galina Boroday were presented. Some internal proximity to the impression can be seen already in his landscapes and still lifes of the 60s, and yet the real flowering came in the genre paintings of the next decade: in Carpathian Musicians, Rural Fair, and Wedding. In Transcarpathian landscapes, “Autumn”, “Blue Psyol”, and written during a holiday in the village of Vilkovo spring landscape “Spring in Vilkovo” (this work is presented in The Chambers Gallery England, bright and open, accented “open” colors , become the main dominant of the work.

Photo: Vadim Odaynik Tristy music. 1972
Tristye music (Troysti music) – a folk instrumental ensemble of musicians in the Carpathian region in the composition of a violin, tambourine, bass or cymbals 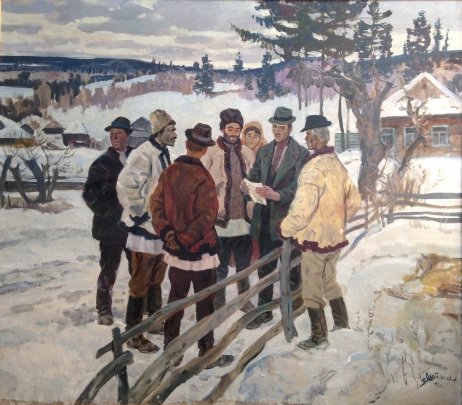