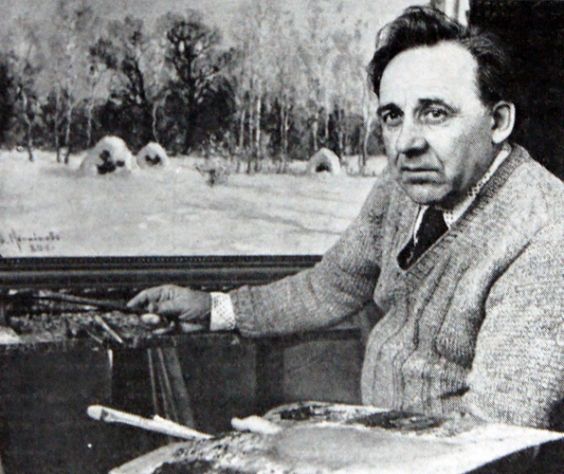 Soviet Ukrainian painter and graphic artist, master of lyrical landscape. People’s Artist of the USSR. Member of the USSR Academy of Arts. Nepiypivo Vasily Ignatievich was born on December 28, 1916 in the village of Kamenka, Poltava province (Dikan district, Poltava region). He graduated from Kharkov Art Studio. Member of the Great Patriotic War. He was awarded the Order of the Red Star and medals. He was one of the main artists of Kiev in the military and post-war years – he held in hand all the design of the rebuilt city of Kiev. He was a different genre artist. I painted still-lifes, landscapes, portraits, including party figures (Blucher, Stalin, etc.). After an unfortunate incident (a portrait of Stalin, his work, raised to the sky on an airship, fell on the field of the Kiev stadium) Vasily Nepiypivo left the portrait genre. Of the hundreds of pre-war works, he retained only two paintings. V.Nepiypivo becomes a refined master of still life, he is described as “.. a bright representative of the Ukrainian landscape school with its characteristic lyricism, spontaneity of impressions, admiration of nature.” He explains his position in this way: “.. basically I do without a human presence. The landscape allows it – nature thinking, it gives the opportunity and great ideas to transmit without the presence of a person. And lately I deliberately do not enter it into this temple of beauty and harmony – it does so much evil to nature and to itself, of course, as a subtle part of nature, therefore it falls out of unity, even though it’s bitter, though sad. ” 1951 took part in regional, republican, all-Union and international art exhibitions.In 1980, in Kiev, a personal exhibition of the artist was held.In 1982, Neyepepivo VI was awarded the title of “People’s Artist of the USSR.” He lived and worked in the city The artist’s works are in museums, ha lreys and private collections of Ukraine and abroad.The years of persistent work of the artist are reflected in works without which, since the mid-1950s, not a single Ukrainian exhibition has been able to do.This childhood memories are “Blossoming mallow.” They breathe peace, the sun and in the “March glimpse” the artist seems to foresee the mild warmth of spring: everything else is covered with a magnificent, sparkling snow blanket, a soft ray slid along the tops of the trees, painting the sides of the canopy hay on the edge of the forest – brought the first news of spring. The artist often builds a picture on refined moods, nuances, subordinating the motive, color and tone to his design. There are motives that are very close to the author. He especially likes to draw water – a symbol of life, everything that exists on earth. For the most part, he has a quiet, calm, in the pure reach of the bay or pond the sky, trees, bushes, sandy beach is reflected. he eagerly writes the spring floods of rivers, when the dense branches of the crown reach the sky, powerfully towering above the flooded areas. The artist is able to convey the direction of the river’s motion, the vastness of the sea element. Lyrical notes always dominate the life-affirming polyphony of the melodies of his canvases. The very names of the works – “Lipa”, “The Breath of Spring”, “Oh, the month went up”, “The Dance of Birch”, “Morning Flavors”, “Blue Song”, “Lilac Foam” – indicates that their author is a real lyricist . A separate page of creativity of Vasily Nepiypivo is his Kiev landscapes. At different times of the year – early spring and golden autumn, in winter and summer – he sings his native city sincerely and lyrically, lovingly and passionately. History and modernity in the works of Nepiypivo appear in indissoluble unity. Architectural monuments, silent and majestic, have detected in their severe forms the existence and deed of our ancestors. And the artist respectfully depicts man-made images of the past. The native Poltava region is sung in the canvases of V. Nepiypivo “The River Do it”, the Spaces of Psalm “,” On the outskirts of Dikanka. “The artist is closely connected with the land on which he grew up. 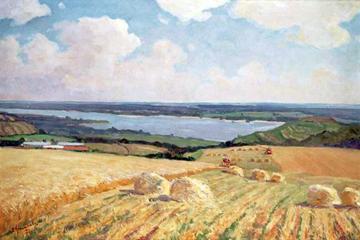