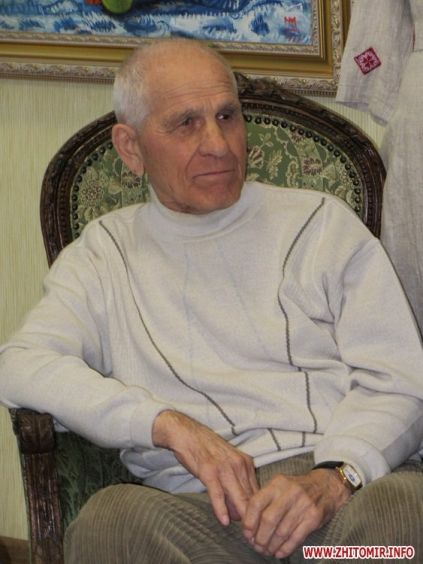 Soviet Ukrainian painter. People’s Artist of Ukraine (1994). Laureate of the State Prize of Ukraine named after T.G. Shevchenko (1992). Member of the USSR Union of Artists. He was born on December 31, 1924 in the village of Yaropovichi (Zhytomyr region, Ukraine). In the 1930s, fleeing from hunger, his parents moved to Magnitogorsk, where he studied and graduated from high school. There he wrote his first work. Studied with the honored art worker of the RSFSR, People’s Artist of the RSFSR, Corresponding Member of the Academy of Arts of the USSR, laureate of the State Prize of the USSR B.D. Degtyaryov, who during the Great Patriotic War was evacuated from Moscow to Magnitogorsk. Since 1942-1943 years. – Cadet of the Tallinn Military-Infantry School. The training took place in Tyumen, where the school was evacuated. 1943 – Heavy front-line wound on the approaches to the Dnieper. 1943-1945. – Treatment in the hospital and return to the front. 1945 – Having lost half vision and having a serious wound to the head, demobilized from the ranks of the Red Army. 1946-1948 gg. – Works as an artist in the art workshop “Vsekohudozhnik” Magnitogorsk and simultaneously studies in an art studio, which is led by the authoritative artist of the Urals, Honored Artist of the RSFSR Y. Soloviev. 1948 – Becomes a candidate member of the Union of Soviet Artists. 1947-1948 gg. – Travel from Magnitogorsk to Moscow, where he studies with the outstanding painter I.E. Grabar. 1948 – Return from the Urals to Ukraine in g. Exactly. Works as head of the art studio of the city Palace of Pioneers. 1949-1965. – Transfer to the homeland in g. Zhitomir. Works as a consultant in the fine arts of the House of Folk Art, artist of the art fund of the RSFSR. 1960 – was admitted to the Union of Artists of the USSR. Awarding the medal “For Labor Distinction”. 1960-2004. – Organizes 14 personal exhibitions. Of these, 4 are republican in Kiev and All-Union in Yalta. People’s Artist of Ukraine since 1994. After the war he devoted his whole life to painting. The artist’s works are: France, Italy, Poland, Bulgaria, etc.), as well as in many private and state collections. The largest collection of paintings by the artist is in the Zhitomir Museum of Local History. Member of the USSR Union of Artists (1960). He died on September 11, 1916 in the city of Zhitomir.

Photo: In the workshop.