Soviet and Ukrainian painter. Winner of the Stalin Prize III degree (1948). Honored Artist of the USSR (1972). Maksimenko Alexander Grigorievich was born on March 15, 1916 in the village of Vilhovatka, Kobylansky district of the Poltava region. In 1933 – 1938 he studied at the Dnepropetrovsk Art College. In 1947 he graduated from the Kiev Art Institute, where he studied at A. Shovkunenko, K. Yeleva, Yu. Cooper, A. Fomin. Since 1947 he participates in exhibitions, including foreign ones. In 1948, the artist became a Stalin Prize laureate of the third degree (for the work of the “Land Owners”, which was exhibited at the State Tretyakov Gallery). Maksimenko A.G. – Member of the National Union of Artists of the Ukrainian SSR since 1947. The title of “Honored Artist of Ukraine” was awarded to Alexander Grigorievich in 1972. A. Maksimenko – a master of still life, landscape, genre painting, the author of numerous portraits. The author of pictures from the collective farm life (“Land Owners”, “Innovators of collective farm fields”, “In the field” “Ptichnitsy” 1965. Frontman of 1969). For the work of the “Land Owners”, which was exhibited at the State Tretyakov Gallery in 1948, became the winner of the Stalin Prize. Selected works: Ukrainian Landscape (1946), Warm Winter (1949), Landscape (1965), Pushcha Voditsa (1977), Frontier (1969), Ptichnitsy (1965). Advanced Experience (1963), Land Owners, Apples on a Blue Tablecloth 1990’s. The artist’s works are presented in the National Art Museum of Ukraine, the Museum of History of Ukraine in the Second World War, Dnepropetrovsk, Poltava and other art museums, in private collections in Ukraine and abroad. He was buried at Baykovoye cemetery in Kiev. 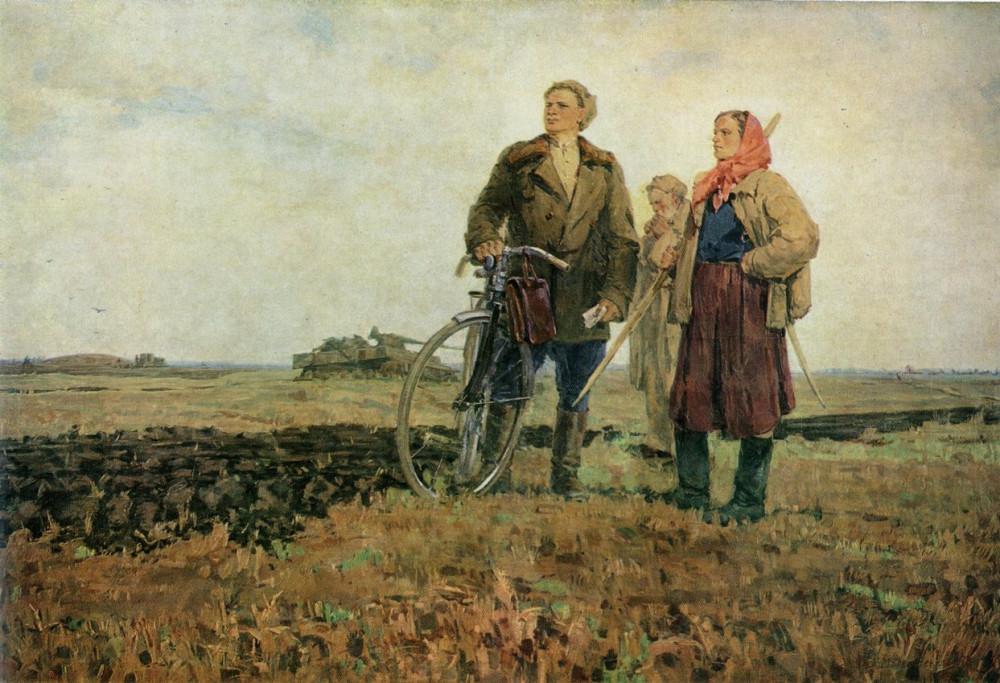 Photo: Alexander Grigorievich Maksimenko. “The hosts of the earth.” 1947 year