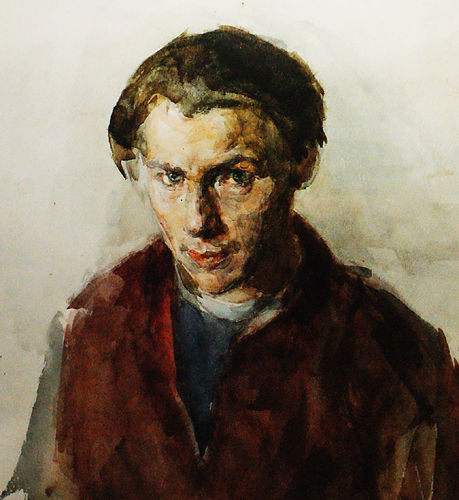 Soviet Ukrainian artist, painter, watercolorist. Yury Pavlovich Lutskevich was born September 9, 1934 in Kirovograd in the artist’s family. While studying in the circle of fine arts in the Kirovograd Palace of Pioneers, he studied with Honored Artist of Ukraine Boris Mikhailovich Vyntenko. From 1951 to 1953 he studied at the Kiev Art School. T. Shevchenko. He finished his studies with a gold medal and entered the Kiev State Art Institute, where he studied under G. Melikhov and V. Puzyrkov. He finished his studies in 1959, began to participate in art exhibitions. In 1959-1962 he taught drawing and painting at the Kiev School of Applied Arts and Drawing. In 1962-1965 he continued his studies at the creative workshops of the Academy of Arts of the USSR in Kiev under the leadership of S. A. Grigoriev (M. Deregus workshop). Since 1966 – a member of the Union of Artists of Ukraine. The main works: “Azov summer” (1964); “In the days of war” (1965); “Puppet master” (1966); “Military Music” (1968) and others. He died in 2001. He was buried in Kiev on the Lukyanov military cemetery. Lutskevich Yu. P. worked in the field of easel painting, graphics. Author of genre compositions, portraits, city landscapes, including a series of paintings dedicated to Kiev, the cities of Western Europe. Yuri Lutskevich – the first master who witnessed the birth of a new wave of neobarochnyh searching in the modern Ukrainian art of the twentieth century. He belonged to a generation of outstanding sixties, who aspired to new forms and new sensations in art. The master’s works are kept in museums, galleries and private collections of Ukraine, Russia, Germany, Poland, Croatia, England, France, Denmark, Portugal, the USA and other countries, and also in Kirovograd in the regional art museum.

Photo 3: Memorial plaque Yu.P. Lutskevich in the city of Kirovograd.