Soviet Ukrainian painter. Member of the USSR Academy of Arts. Academician of the Academy of Arts of Ukraine, People’s Artist of the USSR from 1964, Corresponding Member of the USSR AI in 1975. An outstanding Soviet and Ukrainian painter, master of a thematic painting, portrait painting, one of the best representatives of the realistic school of painting. He was born on September 12, 1925 in the town of Gorodnya, Chernihiv region. He studied at the secondary art school. Shevchenko in Kiev. In 1947 he entered the Kiev Art Institute, which he successfully graduated in 1953. His teachers in the specialty were A. Shovkunenko, S. Grigorieva, C. Yelev. In 1953-1957 he taught at the Secondary Art School. TG Shevchenko. In 1958 he was admitted to the Union of Artists of Ukraine. In 1973 he headed the easel painting workshop at the Kiev Art Institute, and from 1973 to 1985 he was appointed rector of the KHI. Since 1979 he is a professor. In 1983 – 1989 – Chairman of the Board of the Union of Artists. Academician of the AI ​​of Ukraine, People’s Artist of Ukraine since 1964, Corresponding Member of the AI ​​of the USSR since 1975. In 1980 he was a laureate of the National Prize of Ukraine. T. Shevchenko. He was awarded many state awards, including the Order of Lenin, the Red Banner of Labor, “For Merits” of the third degree. He was awarded with the Honorary Diplomas of the Presidium of the Supreme Soviet of the Ukrainian SSR (1985), that of the Kazakh SSR (1966), the Gold Medal. M.B. Grekova (1985), Gold Medal of the Academy of Arts of Ukraine (2005). Honored Art Worker of Poland. In 2007, by the decree of the President of Russia V.P. Lopukhov A.M. awarded with the medal. A. Pushkin “For the great contribution to the rapprochement and mutual enrichment of cultures and peoples”. Lopukhov AM’s works are captured by an ingenious solution of the ostrodynamic multi-figured compositions, harmonious color and accuracy of the psychological characteristics of the main characters. The artist sought not to illustrate the fact or event, but to a deep generalization, the psychological disclosure of the feelings and experiences of the characters. Master of multi-figured subject paintings, Lopukhov AM worked extensively in the genres of portrait, still life and landscape, showing the ability to deeply reveal the inner world of man, the beauty of everyday life. The artist lived and worked in Kiev. The works of AM Lopukhov are in art collections of museums in Ukraine and abroad.

Photo: Lopukhov Alexander “The arrest of the Provisional Government.” 1957 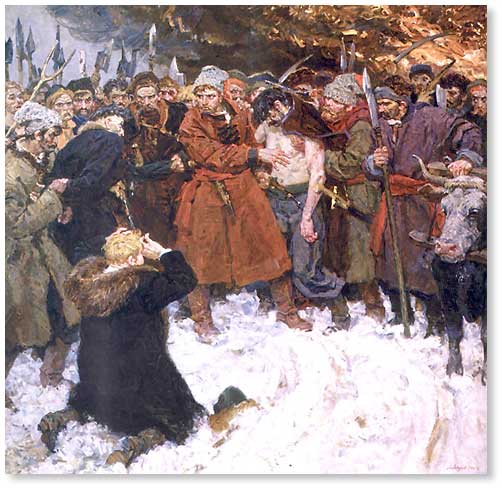