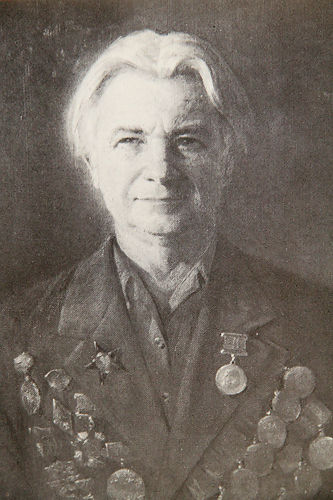 Ukrainian painter. Member of the USSR Academy of Arts.
Lapin Viktor Ivanovich was born October 14, 1923 in the village of Zolotarevka Akhtyrsky (Trostyanetsky) district of the Sumy region in the family of employees.
The first success came to Victor in 13 years, when he became a participant of the Republican exhibition of folk art. He was awarded a diploma and a trip to the Central House of Folk Art in Moscow, where for three months he studied the basics of fine art from the famous artist Georgy Ryazhsky, a professor who taught painting at the Higher Art and Technical Workshops (VKhUTEMAS, now Moscow Art Institute named after V. I. Surikov).
The beginning of the Great Patriotic War coincided with the termination of the tenth grade by Victor. Eighteen-year volunteer Lapin is sent to the Aviation Technical School in Volsk, Saratov region. After his graduation, having received a specialty – a mechanic of combat aircraft, he served on the Leningrad front. He was awarded the Order of the Red Star and medals.
In 1948 he entered the Kharkov Art Institute, where his teachers are People’s Artists of the USSR, painting professors Grigory Tomenko and Pyotr Kotov participated in the All-Union exhibitions of young painters. The thesis “At Dawn”, demonstrated in Moscow on the third review of student works and was acquired by one of the art museums of the capital of the USSR. He ends his studies in 1954.
Since 1964, Lapin Viktor Ivanovich – a member of the Union of Artists of the Ukrainian SSR. Later – Member of the Board of the Kharkiv organization of the Union of Artists of Ukraine, Chairman of the Board of the Kharkov Art Fund, Member of the Board of the Republican Art Foundation, Chairman of the Board of the Mykolayiv Organization of the Union of Artists of Ukraine.
Participated in numerous republican, all-Union and foreign art exhibitions. The works were exhibited in Bulgaria, Canada, Poland and Japan.
Personal exhibitions were held in Nikolaev (1973), Kharkov (1983) and Kiev (1985).
Kiev, Moscow, Kharkov, Sumy, Nikolaev, Donetsk, Chernihiv, Alupka, Odessa, Sevastopol, Cherkassy, ​​Perm, Ulyanovsk, Vladivostok, Sofia are not a complete list of the cities in which museums, galleries and private collections feature works by Victor Ivanovich Lapin.
From August 20 to October 14, 2013, the Kharkov Art Museum hosted the exhibition “Brush of Life and War”, dedicated to the 70th anniversary of the liberation of Kharkov. The exposition was made up of five solo exhibitions that represent the work of Kharkov artists, veterans of the Great Patriotic War: Adolf of Constantinople, Victor Lapin, Lev Fitilev, Ilya Efroimson and Stepan Pismenny.