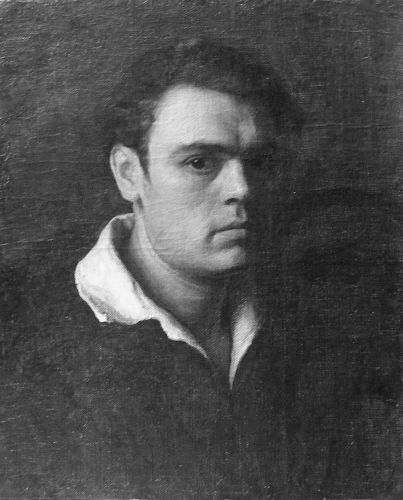 Famous Soviet painter, graphic artist. The winner of the Stalin Prize of the first degree (1948). Full member of the Academy of Arts of the USSR (1958). People’s Artist of the RSFSR (1969). A significant master of portrait and genre painting. A convinced realist, in drawing and painting adhered to a conservative academic manner. Alexander Ivanovich Laktionov was born in Rostov-on-Don. The father of the future artist worked as a blacksmith at the factory, drew pretty well. He also instilled in his son a love of fine art. Laktionov received his initial art education in his native city. In 1926 he entered the Rostov Art School, where he studied for three years under the guidance of the founder of the educational institution of the artist-teacher A. S. Chinenov. Here began the formation of a realistic direction of creativity of the future master. He continues his studies at the All-Russian Academy of Arts in Leningrad (1932-38). A noticeable influence on the young artist during his studies was rendered by the director of the Academy, Professor of Painting, I. I. Brodsky, a disciple of I. Repin, one of the main representatives of realistic traditions in Soviet fine arts. After graduating from the academic course, Laktionov graduated from the postgraduate school at an educational institution (1938-1944), where he was headed by IE Grabar. During this period, Alexander Ivanovich spent much time studying the work of artists of past years, exploring the technique of writing them, trying to find his own picturesque manner. The manifestation of such searches was reflected, for example, in the self-portrait of 1945, which bears the imprint of the traditions of old Spanish masters. Creativity A. Laktionova begins to attract the attention of specialists and viewers at the turn of the 1930-40’s. The artist, who began his career in art as a portraitist, creates a number of memorable works at that time, which include, first of all, the painting “Cadets release a wall newspaper” (1938), a portrait of I. Brodsky (1939) and a series of graphic portraits of artists of the Moscow Art Theater 1940). During the Great Patriotic War, Laktionov was in evacuation in Samarkand, where the students of the LIAS named after I. Repin moved. The artist drew a lot, studied painting, painted the picture “Comrade Stalin’s speech on November 7, 1941” (1942). In the post-war period, most Soviet artists turned to genre painting. Widely known in this direction were such masters as F. P. Reshetnikov, S. A. Grigoriev and others. Alexander Ivanovich also tries his hand at genre and achieves significant success. His painting “Letter from the Front” (1947) made a strong impression on the public and brought the author wide popularity. A year later, for this painting, the artist was awarded the State Prize of the first degree. “Letter from the front” – one of the most famous postwar genre paintings was written by an artist in Zagorsk (Sergiev-Posad) near Moscow, where in early 1944 Laktionov and his family came from evacuation. Alexander Ivanovich recalled: “I lived with my large family in the Trinity-Sergius Lavra. There in the Kremlin wall was once a loophole for a cannon, and afterwards a large cell was built. ” Having concluded the contract for his first postgraduate painting in the spring of 1945, the artist was going to give her the name “Meeting”. He considered several compositional variants, but everything was decided by chance. Once, on a walk, he met a soldier with a bandaged hand, leaning against walking on a stick. He was looking for the right address to send the letter. We talked. Laktionov helped to find the right house and became an unwitting witness to the scene of receiving the long-awaited news from the front. So the intent of the future picture was finally determined. Over the picture Laktionov worked two years and graduated in 1947. As a model for the letter-soldier, he attracted the artist V. I. Nifontov. According to the memoirs of the author of the canvas, the paratrooper, who recently returned from the front, as he should, in army uniform, he asked for his canvas with all his brave manner. Only my hand had to be tied up with a bandage and put me on a homemade crutch. A woman with an envelope is AI Laktionova’s mother’s sister, Evdokia Nikiforovna. The boy reading the letter was the seven-year-old son of the artist Seryozha, and the girl with braids was the daughter of Svetlana. Finally, the neighbor became a girl in a blouse, with a red bandage of the on-duty air defense. Her whole figure is sun-drenched, and her smile adds warmth and light, fills the picture with optimism and joy. In 1948, the picture was shown at the All-Union Art Exhibition in the State Tretyakov Gallery, where it had considerable success with the audience. After the exhibition, the canvas was purchased by the State Tretyakov Gallery. Subsequently, for various museums AI Laktionov made not one author’s repetition of this famous work. This picture of Alexander Laktionov became widely known and loved by the audience, participated in numerous exhibitions, was repeatedly reproduced in the press. It was included in school textbooks, placed on the pages of calendars, on the turns of the magazines “Peasant Woman”, “Ogonek”, “Rabotnitsa”, printed on separate sheets in mass editions. Reproduction of “Letter

Photo: Laktionov Alexander I. “Moving to a new apartment”