Soviet Russian painter. Member of the USSR Union of Artists, People’s Artist of the USSR since 1977. Full member of the Academy of Arts of the USSR, winner of the Stalin Prize of the USSR (1950). He studied at the art school “In Memory of 1905” in N.P. Krymov (1931-1936), in the MGHI them. IN AND. Surikova (1936 – 1945) from S.V. Gerasimova. Yuri Petrovich painted portraits in the early period of his creative work (for the cycle “Noble People of Moscow”, 1949, State Prize of the USSR, 1950), worked on historical and revolutionary themes. Artist Kugach from the early 1960’s. appeals mainly to the topic of the new in the life of the modern village, seeks to poeticize the traditional features of Russian folk life (“Before the Dances”, 1961, The Tretyakov Gallery, Moscow, “Haymaking in the Forest”, 1967, Omsk Museum of Fine Arts, “Farewell”, 1969, Directorate art funds and design of monuments of the Ministry of Culture of the RSFSR, Moscow). State Prize of the RSFSR them. I.E. Repin (1969). Portraitist, the author of genre paintings, sustained in the traditions of the Russian realistic school of painting. Taught in the MGHI them. IN AND. Surikov. He participated in numerous foreign exhibitions around the world. The works of Yu. P. are in the State Tretyakov Gallery, the Kiev Museum of Russian Art, the art museums of Gorky, Rostov, Kharkov, Lvov and Taganrog. Photo: Yuri Kugach is working on the film “On the Barricade” 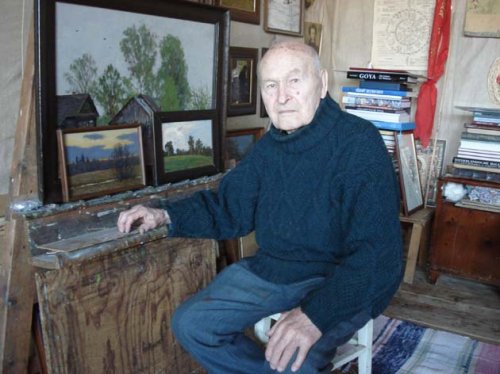 .
Photo: Yu.P. Kugach in the workshop.