Russian Soviet artist, painter, landscape painter, member of the St. Petersburg Union of Artists (until 1992 – Leningrad organization of the Union of Artists of the RSFSR). Vladimir Pavlovich Krantz was born on February 17, 1913 in the city of Mozdok in the North Caucasus in the family of a postal employee. The first lessons in painting and drawing received in the local studio with the artist AI Turbin. In 1934 he came to Leningrad, in 1935 entered the architectural faculty of the Leningrad Institute of Engineers of Public Construction, which he graduated in 1940. In 1940-1941 he worked in Lazo as an artist-designer. After the Great Patriotic War, from July to December 1941, he was engaged in engineering courses at the Leningrad Air Force Academy. Upon termination in December 1941, he was sent as an instructor in the rank of a lieutenant technician to the Volchansk Military Aviation School of Aviation Mechanics (Stalinabad), where he served until the end of the war. After demobilization in August 1945 returned to Leningrad, worked in Lenizo, from 1947 he studied in the studio SG Nevelshtein. Since 1958, Vladimir Krantz participated in exhibitions, exhibiting his works together with the works of the leading masters of fine art of Leningrad. He painted landscapes, genre paintings, still lifes. In the 1970s he gained fame as a master of lyrical landscape. He painted mostly picturesque surroundings of Leningrad and its suburbs. He made creative trips to the Urals, Baikal, repeatedly worked in the houses of artists “Academic Dacha” and Staraya Ladoga, in the Pushkin places of the Pskov region. In 1972, Vladimir Krantz was admitted to the Leningrad Union of Artists. In the Blue Drawing Room of the Union of Artists and today the works of the Soviet artist, patriarch of the lyrical landscape, Vladimir Petrovich Krants are presented. Krantz can be safely entered into the structure of Russian Soviet realism. Vladimir Pavlovich survived the war, long and persistently comprehended pictorial mastery, participated in many exhibitions of the Leningrad branch of the Union of Artists. This majestic-restrained, intelligent and handsome elder, “a fragment of the silver age,” has become another link in the torn link of the times in the tragic and cruel twentieth century; another quiet singer of low-key beauty of the Central Russian landscape. The life and work of Vladimir Pavlovich Krantz is an example of selfless service to art. Krants V.P. wrote a lot from life. A modest hard worker became a singer of the Russian landscape. Thoroughness, good quality in composing the composition, extra sincerity, these are the qualities that distinguish the works of Vladimir Krantz. In his works there is nothing fictitious. Krantz is always recognizable. It was an artist honest with himself and the world around him. Sincere singer of natural beauty, everything he wrote, he selflessly loved. This love and devotion is visible in his numerous works today. V. Krantz worked with Nikolai Timkov, Vyacheslav Zagonek, Dmitry Belyaev and Ivan Varichev at the Academic Dacha and in Staraya Ladoga. It is such a restrained, poetic and sincere note in art in demand in our time of glamor, postglamur and the triumph of commerce. Among the works created by Krantz are “After the Rain” (1959), “March Shadows” (1964), “Birches”, “On the Volkhov”, “On Etudes” (all 1965), “Spring on the Volkhov”, “Beginning of May” ( both in 1966), Staraya Ladoga, April (both 1969), Lilac (1970), May (1971), Mstinskaya Dam (1975), Spring Lace (1976), Favorite City (1977), “In the Gatchina Park”, “April” (both 1978), “The Evening on the Lake” (1980), “July” (1984), “Winter Etude” (1986), “Willow Blossoms” (1987) “Nightingale’s Morning” (1993) and others. Personal exhibitions of works by Vladimir Krantz were shown in Leningrad (1967, 1977, 1991) and St. Petersburg (1992, 1995, 2002). In the 1970s and 1980s, works by Vladimir Krantz were widely represented at exhibitions of contemporary Soviet painting in Japan. In 1989-1992, his work with success participated in exhibitions and auctions of Russian painting L ‘Ecole de Leningrad in France. Vladimir Pavlovich Krantz died on July 20, 2003 in St. Petersburg in the ninety-first year of life. His works are in museums and private collections in Russia, the USA, Japan, Germany, Norway, Belgium and other countries. 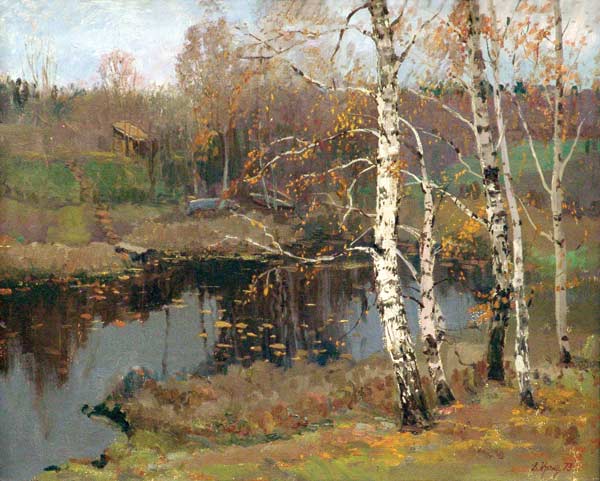