Ukrainian Odessa painter. Stanislav Sychev is a legend of the Odessa underground. Born in Odessa. In 1960 he graduated from the OGKhU (teacher D.M. Frumina). Still a student became the brightest star of the “Greeks”. Brilliantly graduating from the Odessa Art College, Stanislav Sychev has always been uncompromisingly faithful to himself, his aesthetic principles. All his work is an expressionist clash of a bright personality with a medium that rejects this person, hopeless and lonely struggle with the soulless world, and a desperate love for him. These are bright and tragic, emotionally outdated paints. This hymn is the only bright phenomenon for a man in this world – Women. From 1961 to 1963 he lived and worked in Uzbekistan, where he painted a painting based on the majestic poem of Firdousi’s Shah-Name (The Book of the Kings) and wrote many paintings. Many of the paintings created at this time have found their place in the museums of Uzbekistan. In Cambridge, in 1991, at the exhibition “Soviet art in Cambridge” were exhibited works of this period. Returning to Odessa, Stanislav Sychev joined the group of young artists (Lyudmila Hastreb, Alexander and Margarita Anufriev, Valery Basanets, Victor Marinyuk, Vladimir Strelnikov, Valentin Khrushch, Boris Nudga) who opposed their art to the “official”.
In 1967, together with Valentin Khrushch, he conducted the first unauthorized exhibition in the USSR, – the fence exhibition “Sychik + Khrushchik”. It was precisely with the action of the fence exhibition that the history of Odessa’s unofficial art began. In the 1960s and 1980s, a regular participant in “apartment” exhibitions and other non-conformist exhibitors in Odessa, Moscow and Leningrad. Where and when did the first protest action of artists take place? the whole world is a “bulldozer” exhibition of Moscow avant-gardists in 1974. And make a mistake. For long before it was – in 1967 – an unauthorized street exhibition was arranged by Valentin Khrushch and Stanislav Sychev, two Odessa avant-garde. theater, in the Palais Royal, they set up a stand from uncut boards, that is, a fence, and put up their works there, which were not accepted at the official exhibitions. Today, Wikipedia is counting on the protest movement in the fine arts of the USSR precisely from this, Odessa, In 1979 he took part in the informal exhibition “Contemporary Art from Ukraine” (Munich-London-Paris-New York), at which time he creates a number of monumental works in Odessa, Kamyanets-Podolsk. In 1989 – the international biennale “Impreza” (Ivano-Frankivsk). 1989-1999, 2003, 2009 – personal exhibitions in Odessa (the first personal exhibition took place at the Odessa Museum of Western and Oriental Art). Sychev is one of the first post-war painters in Odessa, whose work was exhibited and sold at the Sotheby’s auction. The works are exhibited in the ISMO, the Norton Dodge collection (Zimmerli Museum, USA), and also stored in prestigious private collections. 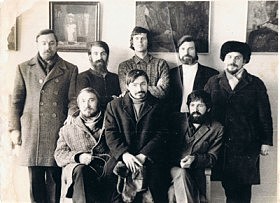