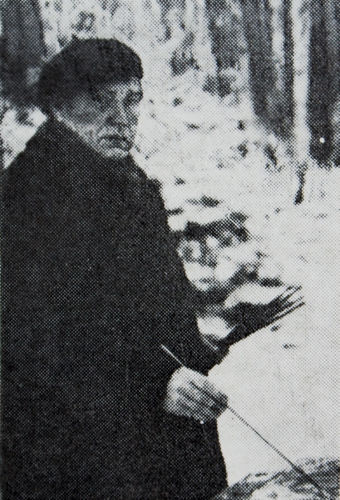 Soviet Ukrainian painter. Member of the USSR Academy of Arts. Master of the landscape. Vladimir Andreevich Korobov was born April 29, 1924 in Artemovsk, Lugansk region in the family of the commander of the Red Army. In 1926, the artist’s family moved to Odessa.
Since childhood, Vladimir drew, dreamed of becoming an artist and trained in the art studio of the Palace of Pioneers. Since 1940 – lives in Zaporozhye.
Member of the Great Patriotic War. In 1941, a volunteer goes to the front in the marines. Marked with military awards.
In 1944, after a serious injury, he was demobilized and returned to Zaporozhye. Since 1950 Korobov VA – participant of regional, republican, all-Union and foreign art exhibitions. Member of the Union of Artists of the USSR since 1960. Worked in the field of easel painting. Author of compositions of historical genre, landscapes, portraits and still lifes. Korobov is called a master of the palette and a “sensual smear”.
During his life, Vladimir Andreevich taught a lot to the younger generation of artists. The main and most beloved pupil was a daughter – a well-known Ukrainian artist Korobova Natalia Vladimirovna. In the Zaporozhye Regional Art Museum on September 10, 2014, a personal exhibition of Vladimir Korobov (on the occasion of his 90th birthday) and Natalia Korobova was opened. Works of the painter are represented in the Zaporozhye Regional Art Museum, in private collections in Ukraine and abroad.