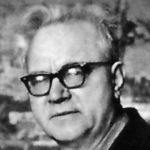 Soviet Ukrainian painter. Member of the USSR Academy of Arts. Georgiy S. Kolosovsky was born on April 15, 1913 in the village of Pervomaiskoye, Odessa region. He graduated from the Odessa Art School. A year later he became a student of the Odessa Art Institute, where he studied at the prominent Ukrainian painters AA. Shovkunenko and P.G. Volokidina. In 1935, George Kolosovsky graduated from the Odessa Art Institute and began teaching drawing and drawing at school. In 1943, while in the ranks of the Soviet Army, GS. Kolosovsky gets acquainted with the follower of the great Russian artist I.I. Levitan – L. V. Turzhansky, from whom he passes an excellent school of painting. In 1945, George Kolosovsky moved to the city of Zaporozhye, where his creative activity begins. He participates in the creation of the Zaporozhye Society of Artists and the regional organization of the Union of Artists of the Ukrainian SSR. Since 1945, G. Kolosovsky – a member of the Union of Artists of the USSR. G.S. Kolosovsky is a participant in numerous all-Union, republican and regional exhibitions. Leading in his work was a lyrical landscape, which had an active and subtle coloristic nature: the Dnieper Distances (1957), The Spring Flood, The Dnieper near Zaporozhye (1961, ZHM), The City above the Dnieper (1964) Ripe wheat “(1967),” In Poltava “,” Sunny “(1970s, ZHM). In his works the nature of central Ukraine appears in all its richness, saturated with authorial sensations of forms and colors. Georgy S. Kolosovsky brought up a whole galaxy of famous Zaporozhye artists. His pupils are such artists as Akinshin, Haiduk, Korobov, Fomin, Smirnov, Pashkanis, Chuikov. The works of George Kolosovsky were decorated with numerous private collections, collections of art galleries and museums. In particular, the Zaporozhye Art Museum holds a collection of works by Georgi Sergeevich.