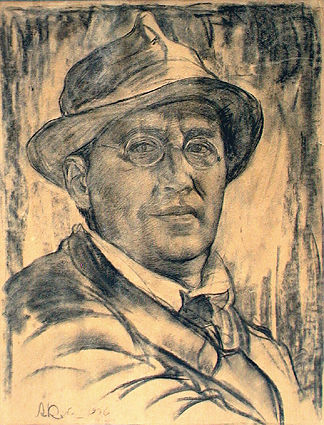 Soviet Ukrainian painter. Member of the USSR Academy of Arts. Aleksei Afanasievich Kokel was born on March 1 (March 13) in the village of Tarkhany in the Buinsk Uyezd of Simbirsk Province (now Batyrevsky District, Chuvash Republic) in a poor peasant family. Ability to draw the boy showed up in his childhood, but to take the path of professional painting helped him the case. In 1899 Chuvashia was seized with famine, which caused outbreaks of epidemics, against which all doctors and even medical students were mobilized. Bone tuberculosis, which suffered Alexei Kokel, escalated during the famine. In this connection, young doctors sent him to an operation in St. Petersburg. After a long treatment, in 1902-03 gg. Alexey studies at the Drawing School at the Academy of Arts in St. Petersburg. At the same time, he works in a private studio of AV Makovsky. In 1904, he entered the Imperial Academy of Arts and for two years was engaged under the leadership of Savitsky, Zaleman, Tsioglinsky. Since 1907, he has been studying in a workshop, first run by I.E. Repin, later – his student Kardanovsky. A. A. Kokel quickly established himself as one of the most capable students. Graduation student work “In the Tea” Kokel, written in 1912, was highly appreciated by I.E. Repin and was exhibited at international exhibitions in Munich and Venice. For this painting, the artist was awarded a trip abroad to study painting. Immediately after his return to his homeland, Kokel takes part in the 44th mobile art exhibition in 1915. Since 1916 he teaches at the Kharkov Art College. After the October Revolution he actively combines organizational work (the head of the iso section of the Military District Commissariat of Kharkov) and creative activity. Kokel writes portraits of revolutionary leaders and panels. In 1921 – 1923 he was rector of the Kharkov Art College. A special merit belongs to Kokel as the organizer and chairman of the Kharkov branch of the Association of Artists of Red Ukraine, which in the late 1920s and early 1930s was the main association of artists of Ukraine. A particularly honorable place, as one of the best works of Soviet realistic painting of the pre-war period, is the picture of A.A. Kokelya “On guard”. In the postwar years, Alexei Afanasyevich continues to engage in creativity, takes part in art exhibitions, teaches at the Kharkov Art Institute. AA Kokel died in 1956 in Kharkov. Creativity of the artist is a vivid manifestation of the connection of Russian pre-revolutionary painting and socialist realism, his works are kept in many museums, galleries and private collections of Ukraine and abroad.