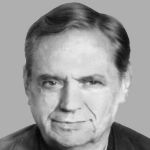 Soviet Ukrainian painter, graphic artist. Landscapist, master of still life and genre painting.
Kobylenkov Mikhail Vasilievich was born on September 21, 1922 in the village of Akhmat, Saratov region in Russia.
Member of the Great Patriotic War, pilot-attack aircraft, fought on the 1st Belorussian Front. In the defeated Berlin at the Reichstag left his autograph. He was awarded the Order of the Red Star, the Patriotic War and medals.
In 1952 he graduated from Kharkov Art Institute. Teachers – V.Yatsenko and A.Kokel, later – I.Bokshay.
In 1952, MV Kobylenkov was awarded the Prize of the Union of Artists of the USSR for his thesis work – a series of illustrations for Vyacheslav Shishkov’s novel Emelyan Pugachev.
Since 1953 he participates in art exhibitions.
In 1952-1963 years. – Director of the Uzhhorod Picture Gallery. In 1956, together with Transcarpathian artists participated in an exhibition held in the State Tretyakov Gallery.
In 1958, MV Kobylenkov Admitted to the Union of Artists of the USSR.
Since 1963, the artist lived and worked in Sevastopol.
In 1967-1970, he taught and was the director of the Sevastopol Children’s Art School. In 1970 – 1975 years. – Director of the Sevastopol Art Museum. M. P. Kroshitsky. The main works: illustrations for the novel “Verkhovino, you are our scroll” M. Teveleva, Uzhgorod, 1954; “Bokorashi” (1957); “Verkhovyna Landscape” (I960); “Winter. Statoi »(1963) and others. Participated in exhibitions: republican since 1954, personal – Uzhgorod, 1960. Awarded the Order of the Red Star.
The works of MV Kobylenkov are kept in museum and private collections in Ukraine and abroad. 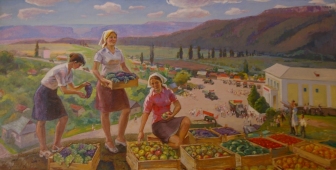