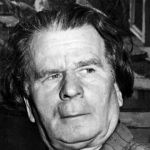 Soviet Ukrainian painter. Member of the USSR Academy of Arts. Yury Kiyanchenko was born on May 11, 1911 in the village of Obukhov of the Kiev province in the family of Vasily Ivanovich and Maria Feodorovna. In the birth, Yuri was named, and after the exchange of passports in 1945 was recorded as George. He studied at the Obukhov Uyezd School. In 1932 he graduated from the two-year Kyiv Art and Industrial School. From 1932 to 1939 he studied at the Kiev Institute of Proletarian Art (since 1934 the Kiev State Art Institute), where his teachers were KNEleva, PG Volokidin, AA Shovkunenko, KD Trokhimenko. After graduation, he teaches at the Kiev State Art School.
In 1933, Yuri Kiyanchenko met his future wife – Nadezhda Kompaniets. From 1939 he took part in regional, and then in republican and all-union art exhibitions.
Member of the USSR Union of Artists. In October 1941, the artist received a summons and was mobilized in the ranks of the Red Army. Two months later he was surrounded by “Kiev Kettle” and was taken prisoner. Yuri falls into the concentration camp “Khorolskaya Pit” near Poltava. But the wife of Nadezhda miraculously managed to get her husband out of prison and they return to Kiev. The period 1942-1945 gg. – The time of the wanderings of the Kiyanchenko family through the territory of occupied Ukraine and Europe: first they live in Lviv, then they go to the Czech Republic, then to Austria. There they met the arrival of the Red Army and Yuri was sent to the Hungarian town of Vlasim, on the border with the Czech Republic, to the internment camp. Thanks to the help of a relative who was an NKVD officer and to whom Father of Hope asked for help, Kiyanchenko’s spouses are allowed to leave the camp and go home. This was December 1945. In Kiev, George begins to work in the studio of the Kiev Association of Artists, leads an art studio. Pictures that Kiyanchenko G.V. writes in the late 1940’s in the early 1950s with success exhibited at republican and all-union exhibitions. In 1954 the Kiyanchenko family from the Union of Artists received a workshop on the territory of the Kiev-Pechersk Lavra. In the same house there were workshops of Mikhail Deregus, Stepan Kirichenko, Mikhail Chepik, Onufry Bizyukov. Georgiy Kiyanchenko often went on creative business trips. He went on compulsory trips to the giants of socialist construction projects, and liked to visit the sketches for the soul, going out on a boat to the Dnieper. The artist worked in the field of easel painting. Among his works there are thematic paintings, landscapes, portraits, still-lifes, and posters. Georgiy Kyianchenko died on June 19, 1989. In 1993, an exhibition of works by GV Kiyanchenko and ND Kompaniets-Kiyanchenko took place at the State Museum of Ukrainian Fine Art in Kiev. The works of Georgy Kiyanchenko are represented in the National Art Museum of Ukraine, in museum, gallery and private collections in Ukraine and abroad.