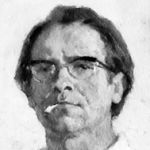 Soviet Ukrainian painter. Member of the USSR Academy of Arts. Alexander Pavlovich Kiselev was born on March 3, 1926 in the city of Romny, Chernigov province. In 1949 he graduated from the Baku Art College, and in 1955 – the Kiev State Art Institute. Teachers on the specialty – A. Shovkunenko, M. Ivanov. Member of the Union of Artists of the USSR. Worked in the field of easel painting and graphics. Master of thematic paintings and portraits. Since 1953, Kiselev A.P. – participant of republican and all-union art exhibitions. The main exhibitions: 1953 – Exhibition of Ukrainian Soviet graphics, Regional Art Gallery, Astrakhan; 1956 – IV-th Fourth All-Union Exhibition of diploma works of students of art colleges of the USSR in 1955, Academy of Arts of the USSR, Moscow; 1957 – Anniversary art exhibition of the Ukrainian SSR, dedicated to the 40th anniversary of the Great October Socialist Revolution, Kiev. Major works: The Young Guards (1957), Misiachno-zoryanno (1957-1960), Tsiolkovsky (1958-1961), Ilich (1963), The Great Kaluga (1963-1965) .) and others . In 1970 Khmelnitsky held a solo exhibition of A.P. Kiseleva. The artist’s works are presented in museum, gallery and private collections in Ukraine and abroad.