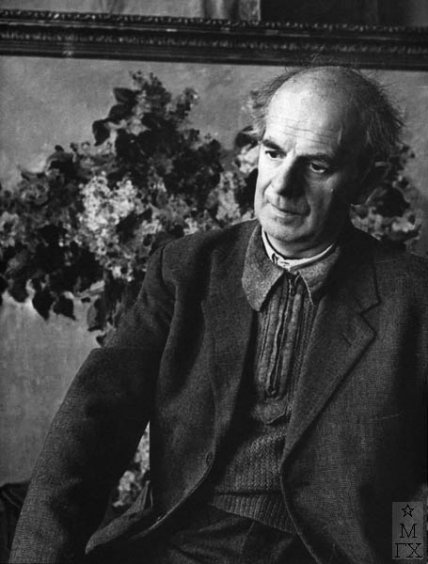 Soviet Russian painter. Member of the USSR Union of Artists. Vasily Veniaminovich Khvostenko, graphic artist and painter, who revived the encaustic technique, was born on August 15, 1896 in the settlement of Borisovka Graivoronsky district of the Kursk region. Comes from a galaxy of serf artists. In the 1910s – Studying at the Moscow School of Painting, Sculpture and Architecture (MUZhVZ). His teachers were N. Kasatkin, A. Korin, L. Pasternak, I. Malyutin, A. Arkhipov, V. Baksheev and K. Korovin. He graduated from the school in 1917. Since 1918, exhibited at many art exhibitions in the RSFSR and abroad, mainly with genre works. The hereditary Russian painter, Vasily Veniaminovich Khvostenko still from his youth perfectly mastered the techniques of academic writing and at the same time the iconography. He was proud of the fact that his great-grandfather, the serf artist of Count Sheremetyev, graduated from the St. Petersburg Academy of Arts in the beginning of the 19th century with a silver medal, that his grandfather and father were icon painters. Studying for “brass money” in the Moscow School of Painting, Sculpture and Architecture, Vasily Khvostenko mastered much for the purpose of earning and helping the family in excess of the program: he painted wooden utensils, mastered chasing, gilding, enamel work, restoration of painting. However, this was not only a salary, but also a hobby. His love for the Russian art craft, for the Russian antiquity encouraged the school’s teachers S. Malyutin, K. Korovin, V. Baksheev, A. Arkhipov, N. Kasatkin, S. Ivanov. The great October the young man greeted with joy. Immediately after graduation, he left for the Turkestan Front as a puppet artist. “It was necessary to be both the author, and the director, and the actor of the productions,” he recalled. In 1920 Khvostenko was sent to the Glavpolitprosvet. Here, in Moscow, he, together with V. Mayakovsky, N. Denisovsky and his fellow at the school M. Cheremnykh draws up “Windows of the GROWTH”. Soon the artist acquired the name and as an easel. He goes headlong into organizing new exhibitions, debates, new forms in art. At exhibitions AHRR in the twenties, his paintings are a success. The circle of his searches in those years was unusually wide: the domestic genre, the Russian song antiquity, revolutionary events embodied in painting and graphics, the painting of fabrics, trays, porcelain, restoration work. Khvostenkov’s miniatures on Russian themes on bone and porcelain in 1925 received a gold medal at the International Exhibition of Applied Arts in Paris. Dynamic canvases of V.V. Khvostenko of the 1920s “Lenin among the Red Guards”, “VI Lenin on the armored car”, “Krasnogvardeisky patrol” are attracted by democracy in the guise of the leader, a large section of events, a living type of workers, a swift action, a clear plot. V.V. Khvostenko was also a participant in thematic exhibitions in honor of the Red Army, “Industry of Socialism”, “Our Achievements”, “Giants of the Urals”, an exhibition dedicated to Moscow metro constructors. Many of the works were created on the heels of events, on trips around the country. He worked in the shops of new building factories, descended into the mines, was the initiator and soul of the group trips of artists to the Urals, to Central Asia and other places where the panorama of socialist construction was so radiantly and romantically unfolding. “The workers are like gods,” the artist liked to say, “they created the backbone of culture.” In our art, we must be as sincere and stubborn as the workers in our business. ” He himself worked obsessively, cheerfully, festively. His “Domna Magnitki”, “Miners”, a graphic series about the Moscow Metrostroi were the figurative documents of the era. During the Great Patriotic War, the artist went to the front, decorated army newspapers, clubs, and painted posters. The sight was cast in the pictures “Podmoskovnaya station”, “Tank troops”, “The story of the collective farmer” and especially in the painting “Our came” (1949). In the post-war years, despite a serious illness (the artist was poisoned with mercury vapor during the experiments), V. V. Khvostenko continues to participate in the all-Union exhibitions. His encaustic painting is gaining more and more recognition. From chamber experiments on marble (in the pre-war years), V. Khvostenko moved to monumental decorative and easel compositions in this technique. The real triumph of encausticism Khvostenko was the final exhibition of his and his daughter’s works in 1959. In the series of paintings based on the “Snow Maiden” by A. N. Ostrovsky, V.V. Khvostenko’s compositional gift was successfully supplemented with a daring decorative palette of his daughter. The major fairy-tale scenes “Snow Maiden”, “Lel”, “Mizgir”, “Kupava”, “Berendey Games”, “Tsar Berendey” and others were shining in color (1957). The show of Soviet encausticism VV and TV Khvostenko in 1959 in Moscow and Kiev aroused amicable approval in the press. “We believe that the exceptional pictorial richness of the encaustic technique gives it the right to occupy a large place in monumental decorative painting along with fresco and mosaic, and to promote and develop this kind of painting in our monumental art. teaching encausticism in art universities, attracting her 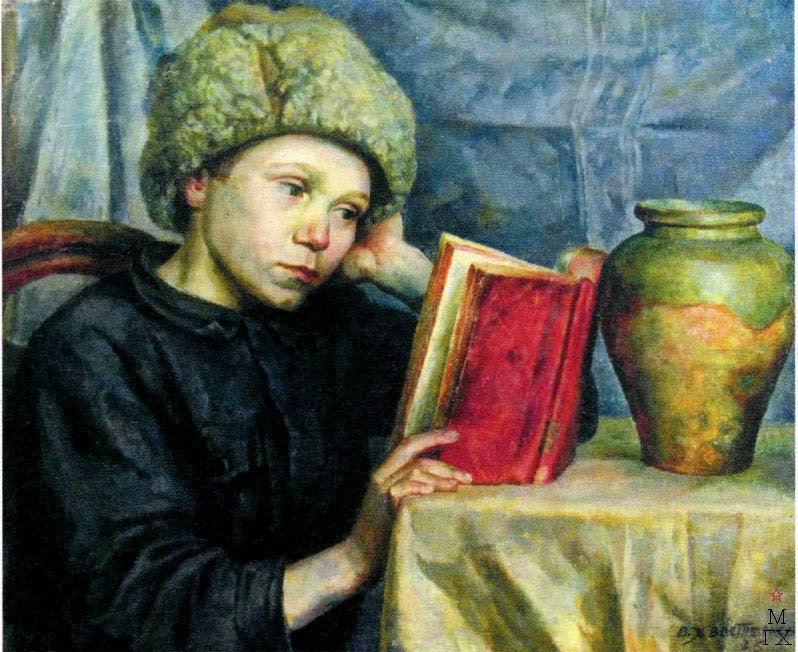