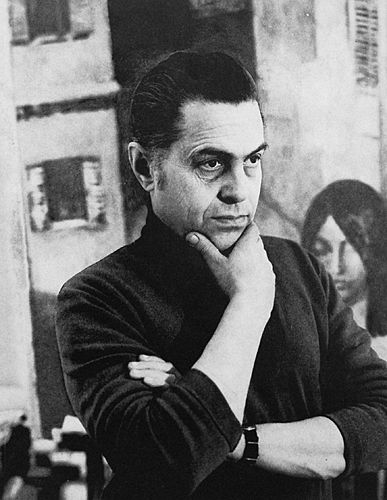 Soviet Ukrainian painter. Member of the USSR Academy of Arts. Khmelnitsky Alexander Anatolyevich was born on August 2, 1924 in Kharkov.
Participated in military operations during the Great Patriotic War. From 1947 to 1953 he studied at the Kharkov State Art Institute with A. Lyubimsky, M. Rybalchenko, P. Kotov, L. Chernov, M. Shaposhnikov. After graduation, Khmelnitsky AA He taught at the Kharkov State Art Institute, which in 1963 was renamed the Kharkov Art and Industry Institute. In 1956 he was admitted to the Kharkov organization of the Union of Artists of Ukraine, where in 1972-1976 and in 1981 – 1998 he was chairman of the painting section. Since 1951 Khmelnitsky AA – a constant participant of republican, all-Union and foreign art exhibitions. In 1967, for the painting “In the Name of Life” Khmelnitsky A. A. was awarded the Silver Medal of the Academy of Arts of the USSR. In 1968 he became the owner of the Silver Medal named after M.B. Grekova. In 1974 he participated in the creation of the diorama “Forcing the Dnieper” in co-authorship with A. Constantinople, V. Mokrozhitsky, V. Parchevsky for the Museum of the Great Patriotic War in Kiev. Personal exhibitions of the artist were held in Kharkov in 1989, 1995,1998, in Simferopol in 1997. Since 1978 he is a professor at the Kharkov Art and Industrial Institute. Khmelnitsky Alexander Anatolyevich in 1984 received the title of People’s Artist of Ukraine. He was a corresponding member of the Academy of Arts of Ukraine since 1997.
His works are in museums, galleries, private collections in Ukraine and abroad. The artist died on June 5, 1998 in Kharkov.