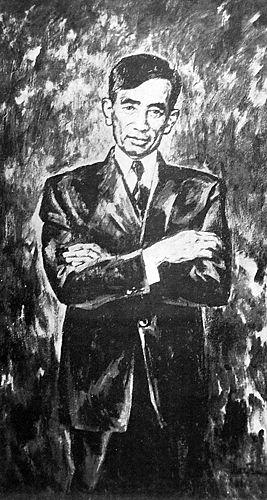 Soviet Ukrainian painter. Honored Artist of the USSR.
Nikolai Alekseevich Khan was born September 10, 1924 in the city of Nikolsk-Ussuriisk (renamed Voroshilov, Primorsky Krai, Russia) in the family of an elementary school teacher. In 1945 he graduated from the Alma-Ata Art College, where his teacher was a well-known Ukrainian artist, a pupil of A.A. Murashko and N.K. Pimonenko, a graduate of the Petersburg Academy of Arts Abram Markovich Cherkassky. In 1952 he graduated from the Kiev State Art Institute, where he studied at AA Shovkunenko, V.G. Puzyrkova, TN. Yablonska. In 1949, Nikolai Khan’s paintings “The Last Minutes” and “Morning on the Dnieper” debuted at the 10th Ukrainian Art Exhibition, opened in Kiev, at the State Museum of Ukrainian Art and the State Museum of Russian Art. Since that time he has been an active participant in republican, all-Union and foreign art exhibitions. Member of the USSR Union of Artists. He worked in the field of easel and monumental and decorative painting. Author of thematic paintings, master of landscapes and still lifes. Nicholas Alekseevich Khan is called one of the pioneers of multi-story dioramas in Ukraine. They were created dioramas: “North Sea” (1966) for the Museum of the Institute of Zoology of the Academy of Sciences of the Ukrainian SSR, “Primitive Society and Modernity” (1969) for the pavilion “Science” VDNH USSR, “Savannah of Africa” ​​(1966-1967) and “Indian Ocean “(1972-1973) for the Museum of the Institute of Biology of the Academy of Sciences of the Ukrainian SSR,” The Burnt Ukrainian Village of Koryukovka “(1975) for the Ukrainian State Museum of the Great Patriotic War of 1941-1945,” The Uprising of the Kiev Arsenal Plant in January 1918 “( 1976-1978) for the State Historical Museum of the Ukrainian SSR, “Medical Assistance in the Great (1979-1981) for the Museum of Medicine of Ukraine.
He was awarded with the Certificate of Honor of the Presidium of the Supreme Soviet of the Ukrainian SSR. Since 1974, N.A. Khan – “Honored Artist of the USSR.” The works of the painter are represented in the National Art Museum of Ukraine, the Memorial Complex “National Museum of the History of the Great Patriotic War of 1941-1945”, the National Museum of History of Ukraine, in private collections in Europe and the USA. 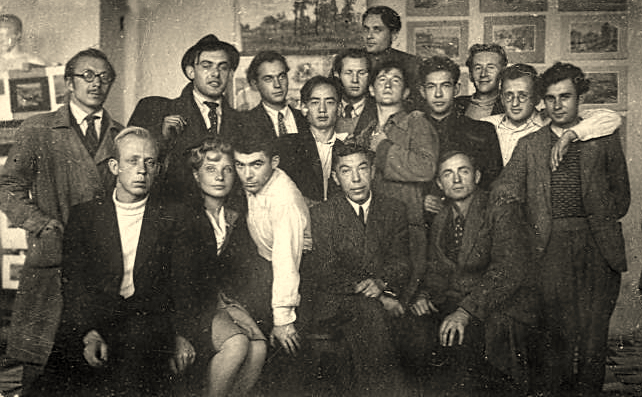 Photo: Teacher in drawing Konstantin Yeleva (sitting in the center) with students of the Kiev Art Institute. Nikolai Khan stands in the middle