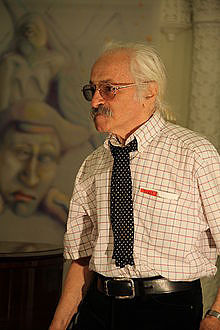 Soviet Ukrainian, Jewish, American artist.
Samuel Solomonovich Kaplan was born on July 8, 1928 in Baku.
In 1937, the Kaplan family moved to Kiev, and when the war broke out, it was evacuated to Orenburg. After returning to Kiev in 1945, Samuel began to study at the Republican Secondary Art School, which he graduated with honors in 1952. His teachers were V. Denisov and E. Volobuev. In the years of service in the ranks of the Soviet Army, the future artist did not abandon drawing classes. Army drawings became the basis of his exhibition “Soldiers’ everyday life”, which took place in the walls of the Kiev State Art Institute (KGHI) in 1957. In the same year, on the third attempt Kaplan SS. became a first-year student of the KGKhI. His teachers were: I.M. Selivanov, A.S. Pashchenko and V.S. Boldyrev. Since 1957, the beginning artist – a participant in regional republican, all-Union art exhibitions. Even in the years of study, his work was exhibited at an international exhibition in Italy. Since 1964 – a member of the Union of Artists of the USSR. S.S. Kaplan – author of numerous landscapes, portraits, genre works, performed in various techniques.
But the main theme of the artist’s work is man and city, his paintings and graphics are lyric, elements of fiction and, at the same time, accuracy in the details of the image. In 1973 and 1987 in Kiev personal exhibitions of the artist were held. Since 1991, Samuel Solomonovich Kaplan lives in New York (USA). His talent was recognized and there. The artist’s works participated in exhibitions in California, New Jersey, the Brooklyn City Hall, and in New York public libraries. Samuel Kaplan is a member of the Los Angeles Arts Association, a member of the Nathan Rakhlin Memorial Fund Board. In the US, the artist’s series of works dedicated to the tragedy of the terrorist act of 2001 is especially well-known. Many pictures are written to support the Jewish community. Works of S.S. Kaplan are in numerous museum and private collections both in Ukraine and the US, and in other countries.