Soviet painter, graphic artist. Member of the Union of Artists of the USSR (1958). He was born in Saratov in 1924. He studied at the Saratov Art College (SKU) (1940-1942) in I.N. Scheglova, B.V. Milovidova, M.D. Egorova. In the Moscow Higher Artistic-Industrial School (1945-1947), P.V. Kuznetsova, A.V. Kuprin. In 1947 he returned to Saratov, graduated from SSU (1947-1948). From 1948 to 1952 he studied at the Moscow Institute of Applied and Decorative Arts in VG. Odintsov, A.A. Deineka. In 1958 V. Kabanov graduated from the Moscow State Institute named after V.I. Surikov – workshop PI. Kotova, then P.P. Sokolov-Skalya. Member of the Union of Artists of the USSR since 1958. He taught at the Royal University of Arts in Phnom Penh, Cambodia (1968-1969). Member of republican, all-Union, foreign exhibitions (since 1953). Works are in the Krasnoyarsk Art Museum, Saratov State Art Museum. A.N. Radishchev, private collections of Germany, Japan, Vietnam, Cambodia, Sweden, America. Kabanov had an inescapable passion for learning and teaching. For several decades he brought up many young artists. Victor Kabanov chose the path of a hermit, a thoughtful observer and traveler – he did not care about the blessings and comforts, if they could interfere with his painting. He did much to capture in the colors the image of the epoch that has come down. Let this era is not so far removed from us – in due course vision will become sharper. And, must be, much will be seen differently. He died in Moscow in 2007, after a long illness. 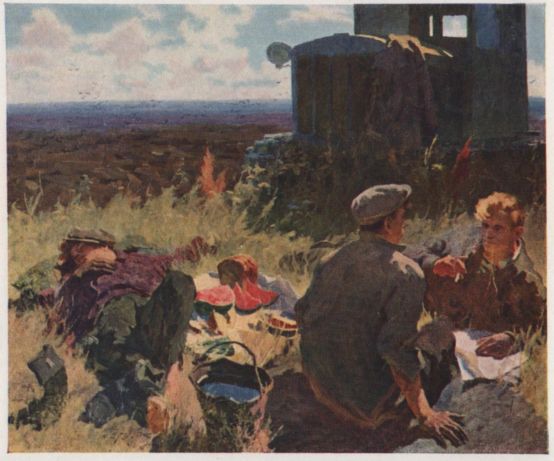