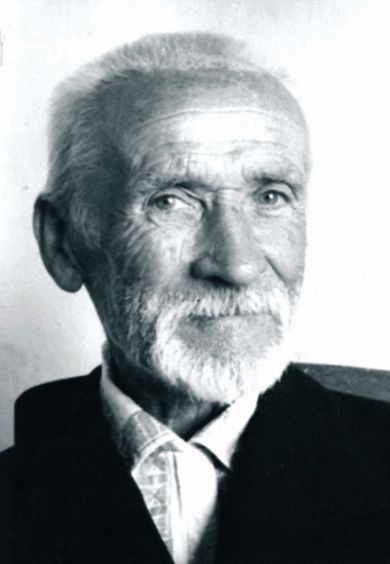 Ukrainian painter, writer, graphic artist, icon painter. People’s Artist of Ukraine (1951). Ivan was born on January 18, 1864 in a poor peasant family in the village of Vyshnopol in Cherkassy region, near Uman (Taln district, Cherkasy region). When the guy turned 10 years old, he went to Kiev with a dream to learn the artist. In 1879, withstood the competition, Ivan entered the icon-painting school at the Kiev-Pechersk Lavra. For two years he diligently carried out all the tasks, did not give up a single job, with enthusiasm drew from nature everything that caught my eye. Historians say that a young man once wrote a self-portrait in front of a mirror and decided to go to the famous drawing school in Kiev to show a portrait, along with other drawings, to the head of the school, the famous artist and teacher Nikolai Ivanovich Murashko (May 20, 1844 – September 22, 1909). Murashko liked the work of the 18-year-old boy, but after learning about his poverty, the teacher asked who will be able to pay for his schooling. Alas, Ivan had nothing to say. At that moment Nikolai Ivanovich was summoned from the cabinet on the case. In anticipation of the “verdict” Izhakevich began to draw the girl’s head from a portrait that hung on the wall. Returning, Murashko was struck by the accuracy of the copy, the speed of work and the skill of the young visitor. He immediately invited Izhakevich to work as an assistant in his post as a tutor for junior students, and in parallel to free the academic course of the Drawing School. Having settled in an apartment on Funduklevskaya street (with money received from tutoring) not far from the school, Ivan devotes all his free time from studies and work to painting. At school, he quickly attracted attention and soon became one of Murashko’s best students. In the Drawing School, Izhakevich studied from 1882 to 1884. In 1883 pupils of the Murashko school were attracted to the restoration of the ancient murals of the Church of St. Cyril. The leaders of the restoration were the artist Mikhail Vrubel and the professor, art historian and archaeologist Adrian Viktorovich Prahov. They, noting the talent of Izhakevich and his studies in the workshop of the Kiev-Pechersk Lavra, offered Ivan and several gifted students Murashko, among whom was the same as Izhakevich, the tutor-pupil Nikolay Pimonenko, without leaving school, to take part in the restoration of the frescoes of the 12th century . This became for the young artist the first serious acquaintance with the specifics of church paintings. Izhakevich recalled this event of his biography as follows: “Nikolai Murashko received a letter from Professor Prakhov and told us, the disciples, that in a few days they will announce the beginning of the restoration of the frescoes in the church of St. Cyril’s in Kurenivka. Vrubel from the very beginning drew attention to the talented young man and even entrusted him to write the Mother of God himself on the choirs. He also advised Izhakevich to go to study at the Petersburg Academy of Arts, “while Chistyakov is still teaching there.” Pavel Petrovich Chistyakov was a talented teacher, master of historical, genre and portrait painting, who brought up such great painters as Victor Vasnetsov, Mikhail Vrubel, Ilya Repin, Valentin Serov, Vasily Surikov, Yehuda Pen, Victor Borisov-Musatov, Vasily and Elena Polenov, Andrey Ryabushkin and many others. In the beginning of 1884 he went to Petersburg to enter the Academy of Arts. At the end of 1884 he became a free listener of the Academy. For his academic achievements, he was awarded a silver medal. In 1888, through financial hardship, the Academy left and got the title of a teacher of drawing a secondary school, begins an independent creative life. In 1917, with faith in the national revival, the artist returned to Kiev. He worked in different directions: book graphics, monumental painting (painted Borisoglebsk church, Assumption Cathedral of the Kiev-Pechersk Lavra), painted portraits and landscapes. He continued to create illustrations for the “Kobzar”, wrote a number of works devoted to the life of Taras Shevchenko. The works of the painter represent a huge historical and cultural, national value as a painting and are in great demand among collectors; are represented in many public and private collections in Ukraine and abroad. 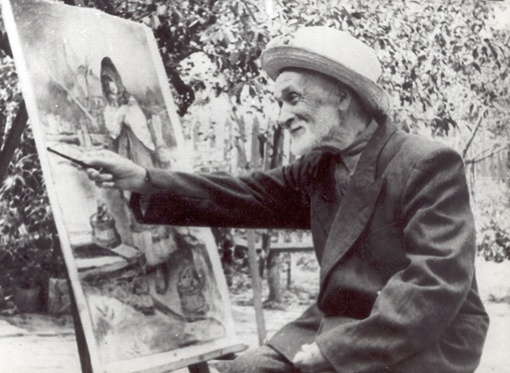 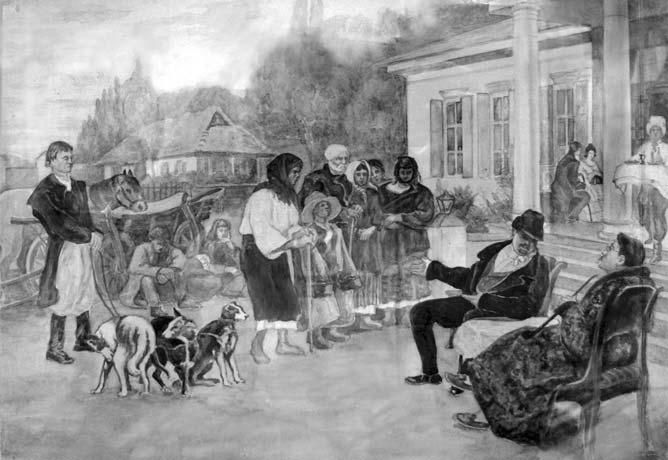 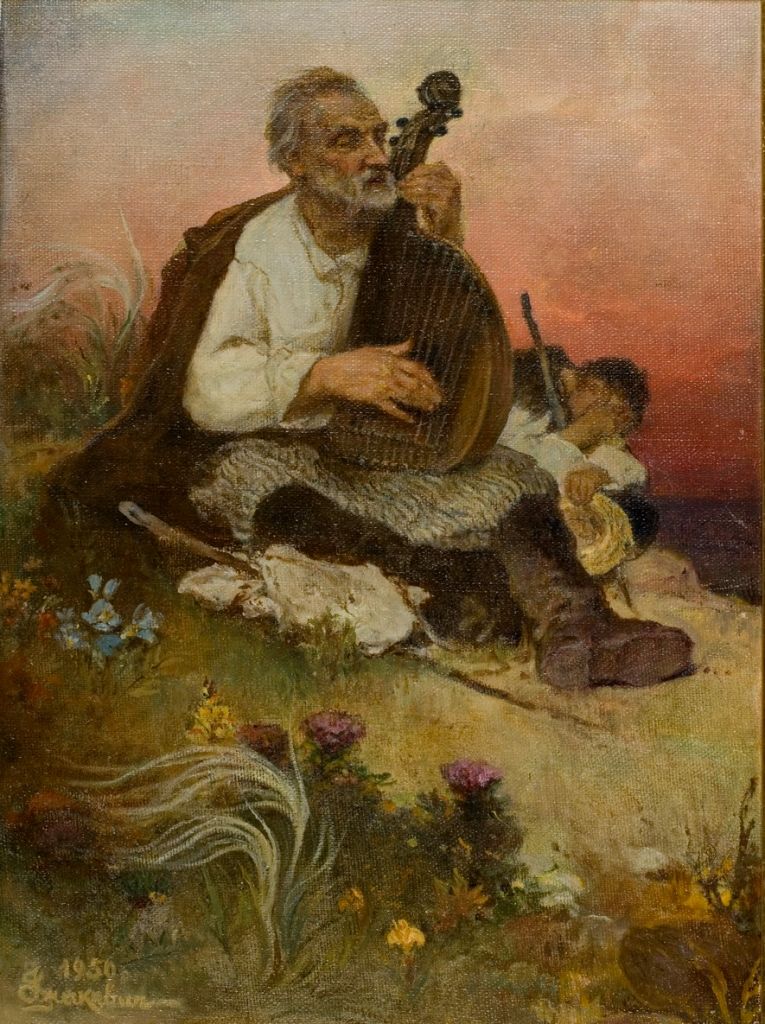 Photo: Ivan Sidorovich Izhakevich “The Song of the Kobzar” (Perebendya), 1950