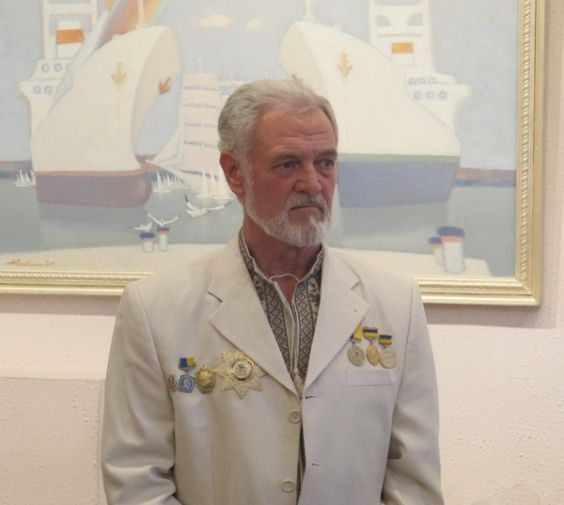 Soviet Ukrainian painter. People’s Artist of Ukraine. Professor. Member of the USSR Academy of Arts. Anatoly Aleksandrovich Gorbenko was born in Kirovograd on February 8, 1944 in the family of a worker. He graduated from the Odessa State Art College and the Art and Graphic Department of the Odessa Pedagogical Institute. Since 1970 the active creative life of the artist began. The first personal exhibition of the artist’s works took place in 1976 in Ilyichevsk. In 1977, the young painter was recommended to the members of the Union of Artists of the USSR, such masters as the active member of the Academy of Arts of the USSR God, People’s Artist of Ukraine Lomykin, Honored Artist of Ukraine Pavlyuk. 1986 is a fateful year in the creative life of the artist. Honored Art Worker of the RSFSR A. Gorsky recommended him to the All-Union House of Art. KA Korovin in the city of Gurzuf. The group was headed by the Honored Artist of the RSFSR A.P. Goryansky, who invited him to continue working at the famous Academic Dacha to them. Repin. The nature of the middle belt of Russia conquered the artist. His creative credo – realism was finally determined there. He actively works, he writes sketches on the state of nature in different seasons, which allows to improve the subtleties of color and better express the state of the soul of the author himself. In 1988, Russian colleagues accepted Anatoly Gorbenko as a member of the creative association of realistic artists Moskvorechye. The paintings of the members of the association are exhibited with great and constant success in the halls of the Academy of Arts, in the exhibition halls of Russia, England, Germany, Finland, Spain. He works in a creative union with such masters of painting as Yu.P. and M.Yu. Kugachi, brothers Tkachev, A.M. Gritsay, B.S. Chadiv, GM Korzhev, N.N. Solomin. A.A. Gorbenko was invited with personal exhibitions in such cities as Genoa, where he showed 85 paintings, New York, where he exhibited 30 of his works, Sofia and Varna, where he exhibited 70 paintings.
The painter was awarded the Honorary Diploma of the Union of Bulgarian Artists.
Anatoly Alexandrovich headed the Board of the Odessa Art Fund, was a member of the Board of the Art Fund of Ukraine. In 2002 he was awarded the title of “Honored Artist of Ukraine”. In 2004, a personal, jubilee exhibition dedicated to the 60th anniversary of his birth was held. Gorbenka in his homeland – in the city of Kirovograd, in the regional art museum. The exhibition boilies show the work of Anatoly Alexandrovich and his son Svyatoslav, a member of the National Union of Artists of Ukraine. People’s Artist of Ukraine since 2011. Chairman of the Board of Odessa Organization NSHU. The artist’s paintings are in the collections of museums in Ukraine, and in private collections in many countries of the world.