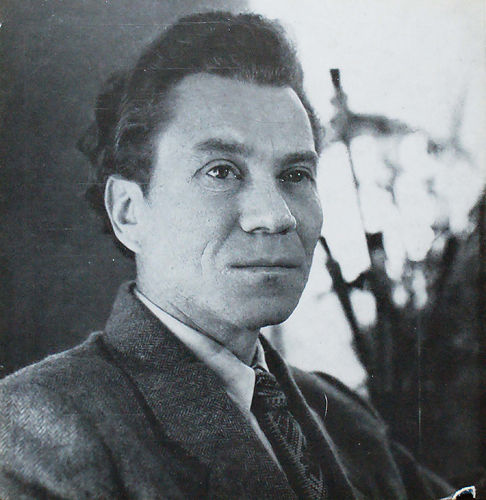 Outstanding Soviet Ukrainian painter. People’s Artist of the USSR. Member of the USSR SS. Mikhail Mikhailovich God was born on September 20, 1911 in Nikolaev in the family of a working shipbuilding plant. From 1930 to 1933, M. Bohiy studied at the Nikolaev Art College, where one of his professors was Krannev Daniil Karpovich (1872 – 1949).
In 1936 Mikhail and his wife moved to Odessa. Worked as a cartoon artist at the Odessa Film Factory.
For the first time, he exhibited his works in 1938 at the regional art exhibition. She debuted with several portraiture sketches. In the years of the Great Patriotic War, an artist who was not taken to the front by the state of health, created posters, satirical drawings. After the liberation of Odessa in April 1944, M. God began active creative work. As a result of this period of art, the artist presented seven portraits at the IX republican exhibition in 1947. A truly mature work was the picture of God “Portrait of the great Svetlana Shipunova”, written in 1950. This work has brought great success to God, placing his name among the best masters of the postwar period. The new creative success of the artist was the painting “Nurse” (1955). “Portrait of an Excellency” and “Nurse” were exhibited at many all-Union and foreign exhibitions. At the world-wide exhibition in Brussels in 1957, M. Boogie for the painting “Nurse” was awarded a bronze medal, and at the exhibition of works of fine art of the socialist countries in Moscow in 1959 – a silver medal. The artist’s talent and work were highly appreciated. Mikhail Mikhailovich God is a full member of the Academy of Arts of the USSR since 1962, People’s Artist of the USSR since 1963. He was awarded the title of Laureate of the State Prize of the USSR to them. T. G. Shevchenko for the paintings “20 Century VI Lenin” (1964 – 1967), “New time” (1969). He was elected a deputy of the Supreme Soviet of the USSR at the 6th and 7th convocations. He was awarded the Badge of Honor and medals. God died Mikhail Mikhailovich January 1, 1990 in Odessa. Works of the artist are kept at the Museum of Ukrainian Fine Arts and the Museum of Russian Art in Kiev, in many art museums of Ukraine and abroad.