An outstanding Soviet painter. People’s Artist of the USSR. Laureate of the State Prize. T.G. Shevchenko. Member of the USSR Union of Artists. Glushchenko Nikolai Petrovich was born in Novomoskovsk, Ekaterinoslav province (Dnepropetrovsk region). In 1918 he graduated from the commercial school in the town of Yuzovka (Donetsk). Soon Glushchenko was mobilized in the Volunteer Army Denikin. After some time with the remnants of the White Guard units, he was in Poland. There I was sent to a camp for internees, and from there I fled to Germany. He studied at the Hans Baluszek School-Studio in Berlin. In the 1920-24 gg. studied at the Berlin Higher School of Fine Arts. In 1925 he moved to Paris, where he was influenced by the French Impressionists: K. Monet, E. Degas, A. Matisse, V. Van Gogh. He created portraits of Romain Roland and Henri Barbusse and others. He designed the Soviet pavilion of the Lyons Fair. By the beginning of the 1930s, the creative appearance of Glushchenko was finally formed, he acted as a talented master with his own original face. His paintings are inherent impressionism, a subtle sense of decorative expressiveness of color and freedom of expression. In 1934, the artist made a creative trip to Spain, the Balearic Islands and Mallorca. In 1936 he returned to Moscow, and in 1944 moved to Kiev. Living in Berlin and Paris, Glushchenko combined the role of the artist and scout. During the life of Nikolai Glushchenko, none of his acquaintances and colleagues knew about his work in exploration. He was one of those who informed the Soviet government in advance (in January 1940) about the impending attack of fascist Germany. As you know, ignoring this information turned out to be a tragedy for the USSR on June 22, 1941. This information he received during the exhibition of folk art of the USSR in Berlin, where he was the organizer. Glushchenko worked in various scenic genres, but his favorite theme was the landscape. Such is, for example, the early series of “Berlin etudes” (1939), the series of documentary landscapes of post-war Kiev (1944), paintings: “March on the Dnieper” (1947), “Kyiv Autumn” (1950), “Thaw” (1956) The Winter Sun “(1956),” Spring in the Carpathians “(1957),” Spring near Kiev “(1961),” May color “(1971),” May “,” Sun on the sea “(1974), cycles of landscapes from travels Italy, France, Belgium, Switzerland and many others. For over thirty years, the art of Glushchenko was directly connected with Ukraine. The enchanting beauty of the native land, the work of people were a constant and powerful source of his inspiration. A lot of paintings, sketches, drawings he dedicated to his native nature, her enchanting inimitable beauty. He was awarded the Order of the Red Banner of Labor, was the People’s Artist of Ukraine and People’s Artist of the USSR, was a laureate of the State Prize. T. Shevchenko. The paintings of the master are in many Ukrainian and foreign museums and private collections. Photo: Glushchenko NP “Edge of the forest in the spring” 1973 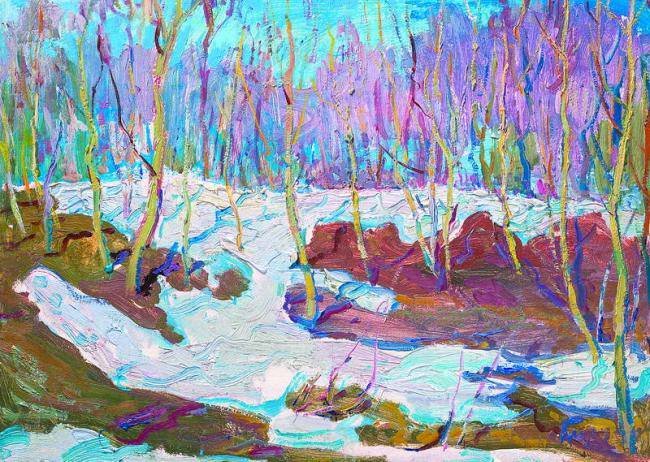